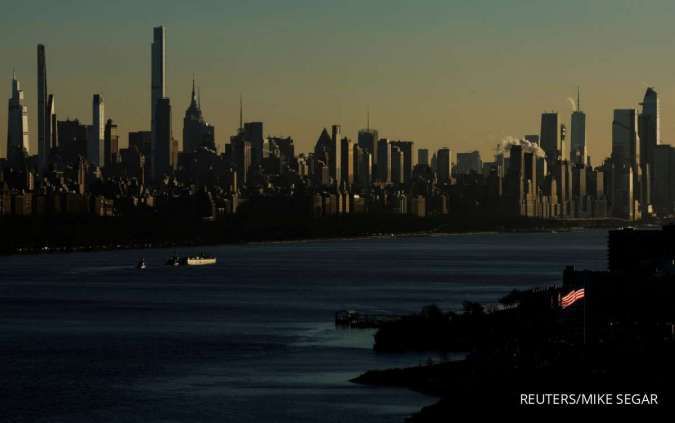 ILUSTRASI. The U.S. economy contracted again in the second quarter amid aggressive monetary policy tightening from the Federal Reserve to combat high inflation.

KONTAN.CO.ID - WASHINGTON. The U.S. economy contracted again in the second quarter amid aggressive monetary policy tightening from the Federal Reserve to combat high inflation, which could fan financial market fears that the economy was already in recession.

Gross domestic product fell at a 0.9% annualized rate last quarter, the Commerce Department said in its advance estimate of GDP on Thursday. Economists polled by Reuters had forecast GDP rebounding at a 0.5% rate.

Estimates ranged from as low as a 2.1% rate of contraction to as high as a 2.0% growth pace. The economy contracted at a 1.6% pace in the first quarter.

The second straight quarterly decline in GDP meets the standard definition of a recession.

But the National Bureau of Economic Research, the official arbiter of recessions in the United States defines a recession as "a significant decline in economic activity spread across the economy, lasting more than a few months, normally visible in production, employment, real income, and other indicators."

Job growth averaged 456,700 per month in the first half of the year, which is generating strong wage gains. Still, the risks of a downturn have increased. Homebuilding and house sales have weakened while business and consumer sentiment have softened in recent months.

The White House is vigorously pushing back against the recession chatter as it seeks to calm voters ahead of the Nov. 8 midterm elections that will decide whether President Joe Biden's Democratic Party retains control of the U.S. Congress.

Treasury Secretary Janet Yellen is scheduled to hold a news conference on Thursday to "discuss the state of the U.S. economy." While labor market remains tight, there are signs it is losing steam.

A separate report from the Labor Department on Thursday showed initial claims for state unemployment benefits decreased 5,000 to a seasonally adjusted 256,000 for the week ended July 23. Economists polled by Reuters had forecast 253,000 applications for the latest week.

Jobless claims remain below the 270,000-350,000 range that economists say would signal an increase in the unemployment rate. Slowing economic growth could, however, encourage the Fed to step back from hefty interest rate increases, though much would depend on the path of inflation, which is way above the U.S. central bank's 2% target.

The Fed on Wednesday raised its policy rate by another three-quarters of a percentage point, bringing the total interest rate hikes since March to 225 basis points. Fed Chair Jerome Powell acknowledged the softening economic activity as a result of tighter monetary policy.