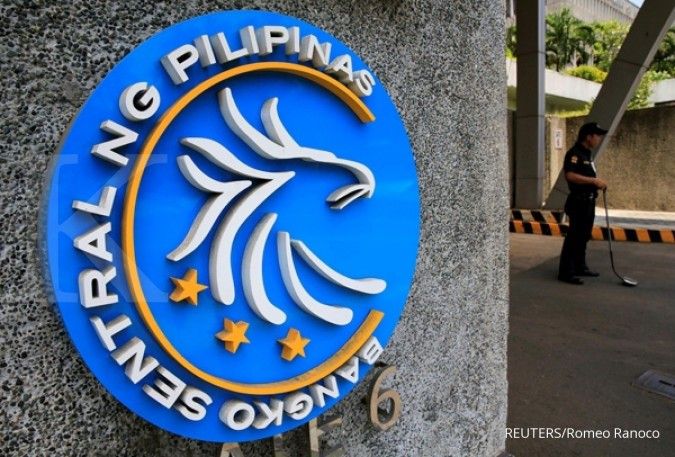 ILUSTRASI. The Bangko Sentral ng Pilipinas lowered the rate on the overnight reverse repurchase facility to a new low of 2.0%.

KONTAN.CO.ID - MANILA. The Philippine central bank delivered a surprise interest rate cut on Thursday, its fifth reduction this year, as damage from a series of typhoons and surging coronavirus infections heap more pressure on the sputtering economy.

The Bangko Sentral ng Pilipinas (BSP) lowered the rate on the overnight reverse repurchase facility by 25 basis points to a new low of 2.0%. It also cut the rates on the overnight deposit and lending facilities to 1.5% and 2.5%, respectively.

Only two of 11 economists Reuters surveyed ahead of Thursday's policy review had expected the BSP to cut rates by a quarter point. Most of them had forecast the central bank would remain on hold as it assessed the impact of earlier easing.

The BSP has now slashed rates by 200 bps this year, aggressively providing support for an economy that contracted more than expected in the third quarter as demand remained weak and government spending slowed.

Indonesia's central bank also confounded expectations on Thursday and cut its rates to a record low to help pull the coronavirus-hit economy out of its first recession in over 20 years.

The BSP said policy will remain accommodative in the coming months and the timing of an exit from unprecedented easing measures will depend on inflation and pace of economic recovery.

"Muted business and household sentiment and the impact of recent natural calamities could pose strong headwinds to the recovery of the economy in the coming months," Governor Benjamin Diokno said.

Moreover, six cyclones have hit the Philippines in a span of just four weeks, including Vamco and Super Typhoon Goni, the world's most powerful this year, causing massive flooding and crop damage.

Further rate cuts could be expected next year, said Alex Holmes, economist at Capital Economics, who predicted a 9.5% economic contraction this year, worse than the 6.9% downturn projected by the World Bank, the biggest slump since the 1980s.

Despite further easing, inflation is not a concern for the central bank, saying expectations are firmly anchored within the 2%-4% target band for 2020 up to 2022.