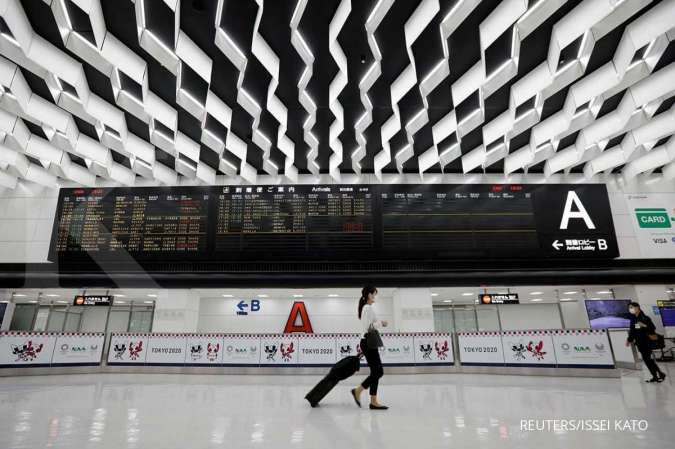 ILUSTRASI. Women wearing protective face masks walk past the arrival zone at Narita international airport, where there are fewer passengers than usual amid the coronavirus disease (COVID-19) outbreak, in Narita, east of Tokyo, Japan November 2, 2020.

KONTAN.CO.ID - TOKYO. The Japanese capital of Tokyo posted the highest coronavirus alert level on Thursday with its daily tally of new cases set for a record high of more than 500, and its governor warned of much worse unless action is taken.

The nationwide tally also hit a new high of 2,201 on Wednesday, according to state broadcaster NHK.

But it is the spread of the virus in the metropolis of Tokyo, which hopes to stage a re-scheduled Olympic Games next year, that causes the most alarm.

Tokyo Governor Yuriko Koike told a late Wednesday news programme that the metropolitan government would take steps to combat the coronavirus "with the view that infections could reach 1,000 cases a day".

The daily tally of new infections in Tokyo were set to hit 534 cases on Thursday, broadcaster TBS reported, surpassing a record 493 the previous day. Latest official figures from Tokyo are announced at 0600 GMT.

With new record tallies across Japan, Prime Minister Yoshihide Suga said the government was looking to tighten guidelines on eating out, such as by limiting its subsidised "Go To Eat" initiative to parties of up to four.

But authorities stopped short of announcing a state of emergency or any drastic steps to restrict the movement of people, mindful of the economic impact.

"I ask citizens once again to be vigilant about taking basic precautions," Suga told reporters, stressing the risk of infections particularly at eateries.

"We ask that people engage in quiet, masked, dining. I will do the same starting today," he said.

For medical preparedness - a separate category - Tokyo kept its alert at the second-highest level, indicating a need to boost hospital capacity but a notch below critical levels.