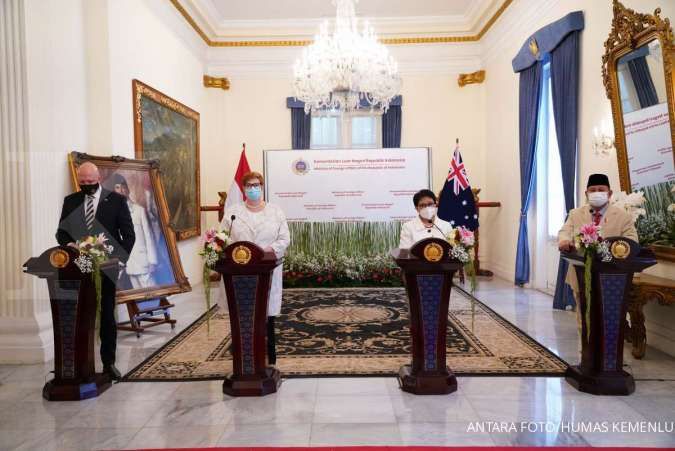 ILUSTRASI. Indonesia and Australia agreed to deepen security ties during a ministerial meeting on Thursday

KONTAN.CO.ID - ​JAKARTA. Indonesia and Australia agreed to deepen security ties during a ministerial meeting on Thursday, with discussions underway towards enabling joint military training in Australia and participation in its defence academies.

Agreements were signed over counter-terrorism, defence and cybersecurity, Indonesian Foreign Minister Retno Marsudi said, plus another agreement on support for Pacific island nations.

The trip to Jakarta, by Foreign Minister Marise Payne and Defence Minister Peter Dutton, was the first Australian ministerial visit to Indonesia since the start of the pandemic.

Military exchanges between the two neighbours have previously included counter-terrorism and border protection.

But those ties have been strained at times, including over alleged abuses by Indonesian Kopassus special forces in East Timor in 1999, Australian spies in 2013 tapping then President Susilo Bambang Yudhoyono's phone, and Indonesian concerns in 2017 about teaching and remarks made at an Australian army language training facility.

Other areas discussed on Thursday included political developments in Afghanistan and Myanmar, the ministers said, with both countries expressing support for the mission of a Southeast Asian regional envoy, plus peace and security in the Indo-Pacific.

"Indonesia and Australia must become the anchors of cooperation in the Indo-Pacific region," said Dutton, describing the region as "increasingly contested".

The meeting came amid new concerns over the South China Sea, including a law announced by China requiring notification from foreign vessels before entering vast stretches of ocean that it claims as its own.

"We welcome a region that supports a level playing field based on rules and norms to ensure healthy competition rather than competition that risks sliding into instability or conflict," said Payne.

"Australia and Indonesia are well placed to cooperate on this vision."

Australia's foreign and defence ministers will meet counterparts elsewhere in the Indo-Pacific, with stops in India, South Korea and the United States.