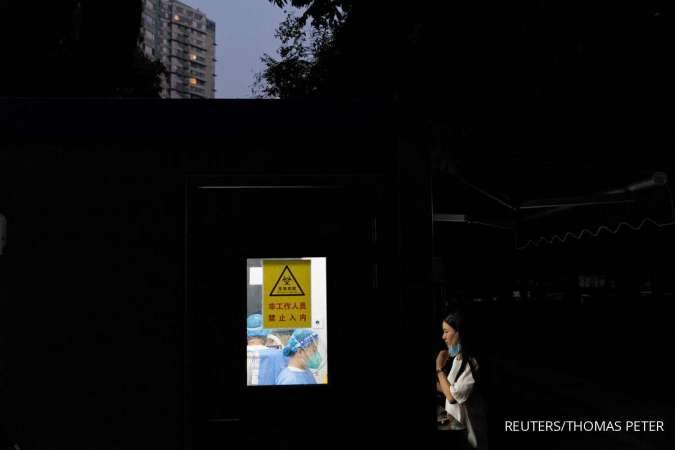 ILUSTRASI. A woman gets a swab at a nucleic acid testing station, set up city-wide to trace possible coronavirus disease (COVID-19) outbreaks in Beijing, China.

KONTAN.CO.ID - BEIJING. Beijing's most populous district urged residents to stay at home on Monday, extending a request from the weekend as the city's COVID-19 case numbers rose, with many businesses shut and schools in the area shifting classes online.

Nationally, new case numbers held steady on Sunday near April peaks as China battles outbreaks in cities across the country, from Zhengzhou in central Henan province to Guangzhou in the south and Chongqing in the southwest.

Still, China is trying to ease the impact of containment measures that drag on the economy and frustrate residents fed up with lockdowns, quarantine and other disruptions, even as it reiterates its commitment to its zero-COVID approach.

On Sunday, Beijing city officials urged residents of the sprawling Chaoyang district - home to nearly 3.5 million people as well as embassies and office towers - to remain at home on Monday.

"The number of cases discovered outside quarantine is increasing rapidly at present, and there are hidden transmission risks from multiple places," Liu Xiaofeng, deputy director of the Beijing Center for Disease Prevention and Control, told a media briefing.

"The pressure on Beijing has further increased," he said.

The Chinese capital reported 621 new infections for Saturday, up from 515 a day earlier. As of 3 p.m. on Sunday, it added a further 516 new infections.

Many Beijing residents stocked up on food during the weekend, with some delivery services experiencing delays.

Hairdressers in neighbouring Dongcheng district were also told to shut.

On Sunday, China reported 24,435 new COVID-19 infections for Nov. 19, down slightly from 24,473 a day earlier but near highs clocked in April when Shanghai, China's largest city, was in the midst of an outbreak and grinding two-month lockdown.

While official infection tallies are low by global standards, China tries to stamp out every infection chain, making it an outlier nearly three years into the pandemic.

Officials said that the Panyu district will resume in-person school for primary and middle school students on Monday, while online teaching continues in seven of the city's 11 districts.

Many analysts expect such a shift to begin only in March or April, however, with the government arguing that President Xi Jinping's signature zero-COVID policy saves lives.

Experts warn that full reopening requires a massive vaccination booster effort and a change in messaging in a country where the disease remains widely feared.

The People's Daily, the ruling Communist Party's official newspaper, warned on Sunday that the pandemic may expand due to mutations and seasonal factors.

"The situation of pandemic control is severe. We must maintain confidence that we will win, resolutely overcome issues such as insufficient understanding and insufficient preparation," it said in an editorial.