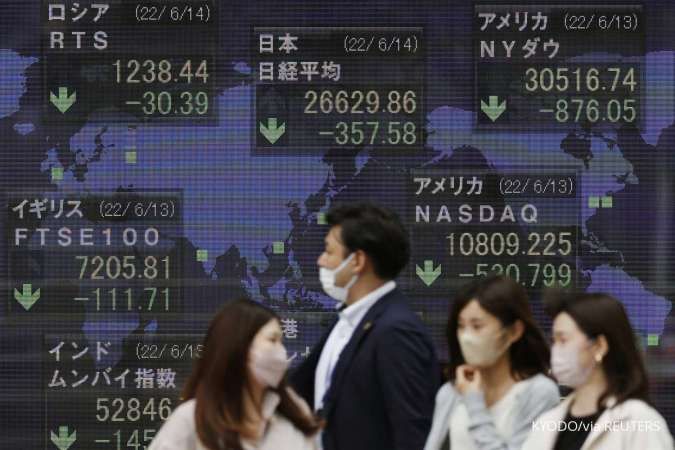 KONTAN.CO.ID - SYDNEY. Asian share markets started cautiously on Monday as a run of soft U.S. data suggested downside risks for this week's June payrolls report, while the hubbub over possible recession was still driving a relief rally in government bonds.

The search for safety kept the U.S. dollar near 20-year highs, though early action was light with U.S. markets on holiday.

Cash Treasuries were shut but futures extended their gains, implying 10-year yields were holding around 2.88% having fallen 61 basis points from their June peak.

However, both S&P 500 futures and Nasdaq futures eased 0.4%, after steadying just a little on Friday.

David J. Kostin, an analyst at Goldman Sachs, noted that every S&P 500 sector bar energy saw negative returns in the first half of the year amid extreme volatility.

"The current bear market has been entirely valuation-driven rather than the result of reduced earnings estimates," he added.

"However, we expect consensus profit margin forecasts to fall which will lead to downward EPS revisions whether or not the economy falls into recession."

Earnings season starts of July 15 and expectations are being marked lower given high costs and softening data.

The Atlanta Federal Reserve's much watched GDP Now forecast has slid to an annualised -2.1% for the second quarter, implying the country was already in a technical recession.

The payrolls report on Friday is forecast to show jobs growth slowing to 270,000 in June with average earnings slowing a touch to 5.0%.

Yet minutes of the Fed's June policy meeting on Wednesday are almost certain to sound hawkish given the committee chose to hike rates by a super-sized 75 basis points.

"But the market has also moved to price in an increasingly aggressive rate cut profile for the Fed into 2023 and 2024, consistent with a growing chance of recession," noted analysts at NAB.

In currencies, investor demand for the most liquid safe harbour has tended to benefit the U.S. dollar which is near two-decade highs against a basket of competitors at 105.04.

The euro was flat at $1.0433 and not far from its recent five-year trough of $1.0349. The European Central Bank is expected to raise interest rates this month for the first time in a decade, and the euro could get a lift if it decides on a more aggressive half-point move.

The Japanese yen also attracted some safe haven flows late last week, dragging the dollar back to 135.00 yen JPY=EBS from a 24-year top of 137.01.

A high dollar and rising interest rates have not been kind to non-yielding gold, which was pinned at $1,808 an ounce having hit a six-month low last week.

Fears of a global economic downturn also undermined industrial metals with copper hitting a 17-month low having sunk 25% from its March peak.

Oil has generally fared better as supply constraints and the conflict in Ukraine offset concerns about demand. Output restrictions in Libya and a planned strike among Norwegian oil and gas workers were just the latest blows to production.