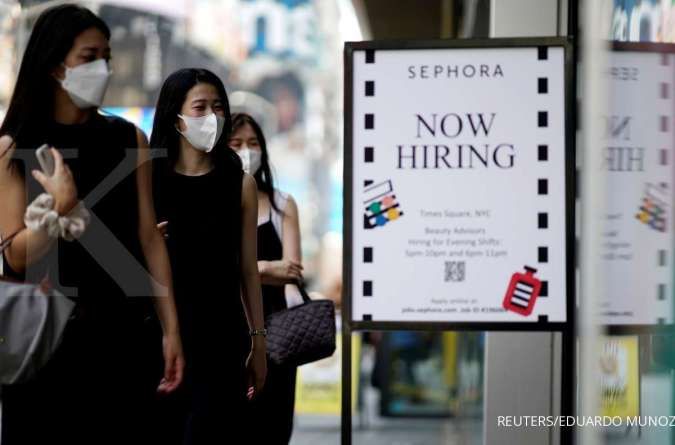 KONTAN.CO.ID - WASHINGTON. U.S. employers hired more workers than expected in November and increased wages, shrugging off mounting worries of a recession, but that will probably not stop the Federal Reserve from slowing the pace of its interest rate hikes starting this month.

Despite the strong job growth, some details of the Labor Department's closely watched employment report on Friday were a bit weak, which economists said could be flagging upcoming labor market weakness. Household employment decreased for a second straight month. About 186,000 people left the labor force, keeping the unemployment rate unchanged at 3.7%.

Labor market tightness and strength keeps the Fed on its monetary policy tightening path at least through the first half of 2023, and could raise its policy rate to a higher level where it could stay for sometime. It also underscores the economy's resilience heading into was is expected to be a tough year.

"November's labor market report was clearly bad news for the Fed's war on inflation," said Jan Groen, chief U.S. macro strategist at TD Securities in New York. "The Fed has no other choice than to remain in tightening mode for the near future, with 50 basis points hikes in December and February."

Nonfarm payrolls increased by 263,000 jobs last month. Data for October was revised higher to show payrolls rising 284,000 instead of 261,000 as previously reported. Monthly job growth of 100,000 is needed to keep pace with growth in the labor force.

Hiring remains strong despite announcements of thousands of job cuts by technology companies, including Twitter, Amazon and Meta, the parent of Facebook.

Economists say these companies are right-sizing after over-hiring during the COVID-19 pandemic, noting that small firms remain desperate for workers.

There were 10.3 million job openings at the end of October, with 1.7 openings for every unemployed person, many of them in the leisure and hospitality as well as healthcare and social assistance industries.

There were 45,000 jobs added in healthcare, while government payrolls increased 42,000. Construction employment increased by 20,000 jobs despite the housing market turmoil, while manufacturing added 14,000 jobs.

But retail trade employment fell by 30,000 jobs, with most of the losses in general merchandise stores. Transportation and warehousing payrolls decreased by 15,000 jobs. Temporary help jobs, a segment normally considered a harbinger of future hiring, decreased by 17,200.

"The labor market might encounter some bumps in the road next year, but it's heading into 2023 cruising," said Nick Bunker, head of economic research at the Indeed Hiring Lab.

Fed Chair Jerome Powell said on Wednesday the U.S. central bank could scale back the pace of its rate hikes "as soon as December." The Fed has raised its policy rate by 375 basis points this year from near zero to a 3.75%-4.00% range in the fastest rate-hiking cycle since the 1980s.

Policymakers meet on Dec. 13 and 14. Attention now shifts to November's consumer price data due on Dec. 13.

Stocks on Wall Street fell. The dollar rose against a basket of currencies. U.S. Treasury prices were lower.

With the labor market still tight, average hourly earnings increased 0.6% after advancing 0.5% in October. That raised the annual increase in wages to 5.1% from 4.9% in October. Wage growth peaked at 5.6% in March.

The broad wage gains suggest that the moderation in inflation, evident in October data, will be gradual. Economists said this also raised concerns about a wage-price spiral that could keep service prices rising outside the shelter component. Fed officials have shied away from calling a price-wage spiral.

"The broad-based nature of the increase and its consistency with other data on wages makes us think that around 5% average hourly earnings growth is not an aberration," said Andrew Hollenhorst, chief U.S. economist at Citigroup in New York.

Strong wage gains are helping to drive consumer spending, which surged in October, leading economists to believe that an anticipated recession next year would be short and shallow. But there are some signs of weakness emerging in the labor market.

Household employment decreased by 138,000 jobs, the second straight monthly decline. Though household employment tends to be volatile as it is drawn from a smaller sample compared to nonfarm payrolls, economists said the divergence between these two measures was important to watch.

Others, however, argued nonfarm payrolls were a better gauge and expected household employment to converge with payrolls.

The participation rate, or the proportion of working-age Americans who have a job or are looking for one, slipped to 62.1% from 62.2% in October. Some of the decrease in household employment and participation was likely because of illness, with 1.6 million people saying they were absent from work because they were sick, up 265,000 from October.

The participation rate for Americans 55 years and older fell, possibly reflecting retirements. The employment-to-population ratio dipped to 59.9% from 60.0% in October.