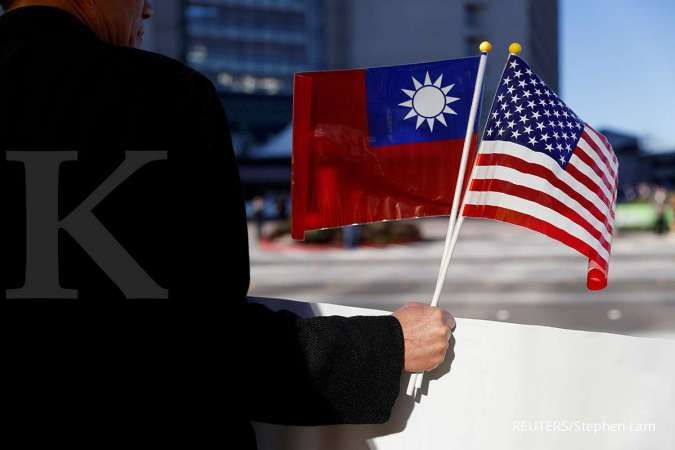 ILUSTRASI. US has approved a potential $1.1 billion sale of military equipment to Taiwan

KONTAN.CO.ID - WASHINGTON. The U.S. State Department has approved a potential $1.1 billion sale of military equipment to Taiwan, including 60 anti-ship missiles and 100 air-to-air missiles, the Pentagon said on Friday, amid heightened tensions with China.

The package was announced in the wake of China's aggressive military drills around Taiwan following a visit to the island last month by U.S. House of Representatives Speaker Nancy Pelosi, the highest-ranking U.S. official to travel to Taipei in years.

The sale includes Sidewinder missiles, which can be used for air-to-air and surface-attack missions, at a cost of some $85.6 million, Harpoon anti-ship missiles at an estimated $355 million cost and support for Taiwan's surveillance radar program for an estimated $665.4 million, the Pentagon's Defense Security Cooperation Agency (DSCA) said.

The Pentagon said the equipment and support announced on Friday would not alter the basic military balance in the region. U.S. officials said they did not reflect any change in policy toward Taiwan.

"These proposed sales are routine cases to support Taiwan’s continuing efforts to modernize its armed forces and to maintain a credible defensive capability," a U.S. Department of State spokesperson said, requesting anonymity.

Rupert Hammond-Chambers, president of the U.S.-Taiwan Business Council, said his organization opposed what he termed a "limited approach" to arms sales to Taiwan.

"As the (China's) People’s Liberation Army (PLA) recently demonstrated in its mock blockade, the island faces a range of threats that require a range of capabilities. To deny the island the ability to mount a full defense will, over time, create new gaps in Taiwan’s defenses that the PLA can exploit," Hammond-Chambers said in a statement.

The order reflects continued U.S. support for Taiwan as Taipei faces pressure from China, which claims Taiwan as its own territory and has never ruled out using force to bring the democratically ruled island under its control.

The sales must be reviewed by Congress, but both Democratic and Republican congressional aides said they do not expect opposition. There have been at least two other visits to Taiwan by members of Congress from both parties since Pelosi's visit, as well as by governors of U.S. states, all condemned by Beijing.

Taipei says the People's Republic of China has never ruled the island and has no right to claim it.