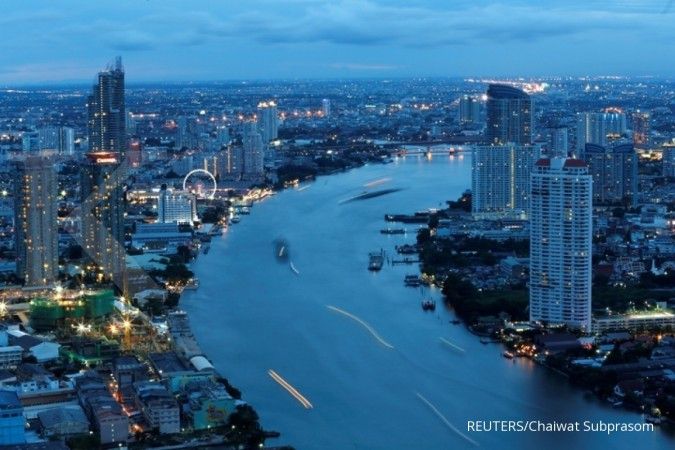 ILUSTRASI. A view of Chao Phraya river in Bangkok, Thailand. Thailand economy grew an annual 2.5% in the June quarter, the fastest since the second quarter of 2021.

KONTAN.CO.ID - BANGKOK. Thailand's economy expanded at the fastest pace in a year in the second quarter as eased COVID-19 restrictions boosted activity and tourism, but multi-year high inflation and China's slowdown remain a drag on the nascent recovery.

The government slightly revised its 2022 economic growth forecast to 2.7% to 3.2% from an earlier 2.5 to 3.5% growth range, citing a rebound in the crucial tourism sector, increased consumption and exports. Last year's growth of 1.5% was among the slowest in Southeast Asia.

The economy grew an annual 2.5% in the June quarter, the fastest since the second quarter of 2021, data from the National Economic and Social Development Council showed on Monday.

That compared with a forecast 3.1% rise in a Reuters poll and upwardly revised 2.3% growth in the March quarter.

Southeast Asia's second-largest economy is making a steady recovery after the lifting of pandemic curbs but the absence of Chinese visitors and China's slowdown have continued to pressure growth at a time when Thailand has started to raise rates to tackle inflation.

"Thailand’s economy kept rebounding in the second quarter of the year on the back of a reopening boost. Although higher commodity prices will drag on prospects, with the tourism sector enjoying a decent rebound, we expect the recovery to continue over the coming months," Capital Economics said in a note.

However, it expects inflation to weigh on consumer spending and investment, while exports will be restrained by a slowdown in the global economy.

On a quarterly basis, gross domestic product (GDP) grew a seasonally adjusted 0.7% in April-June, missing a forecast 0.9% increase, and against an upwardly revised 1.2% in the first quarter.

"This reflected the adversities of the Russian-Ukraine war which bumped up import bills and imported inflation," said Kobsidthi Silpachai, head of capital markets research of Kasikornbank.

"This is likely to persuade monetary policymakers to proceed carefully. We view that the Bank of Thailand will move rates by another 25 bps at the November meeting rather than at the September meeting to better assess the response of the last move as well as the stance of the U.S. Federal Reserve," he added.