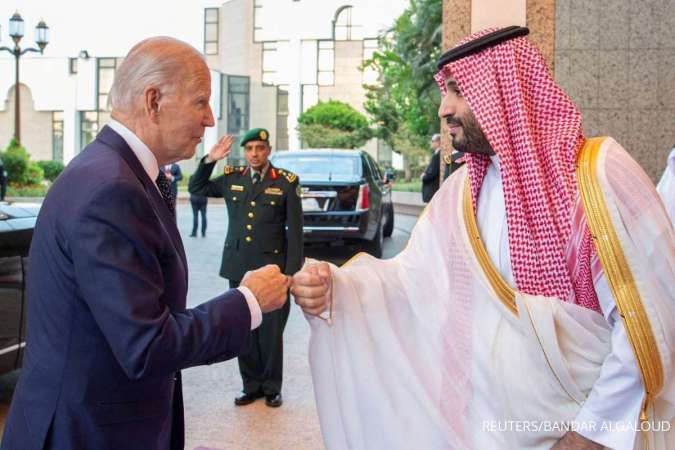 KONTAN.CO.ID - CAIRO. Saudi Arabia rejected as "not based on facts" criticism of an OPEC+ decision last week to cut its oil production target despite U.S. objections, and said on Thursday that Washington's request to delay the cut by a month would have had negative economic consequences.

The White House pushed back against that on Thursday, saying it presented the Saudis with an analysis that showed the cuts could hurt the world economy, and alleging the Saudis pressured other OPEC members on a vote. Officials from both countries are expected to discuss the situation shortly.

The back-and-forth has added to what has already been a frosty period of relations for the two countries, who have had an energy-for-security alliance for decades.

OPEC+, the producer group comprising the Organization of the Petroleum Exporting Countries (OPEC) plus allies including Russia, last week announced a cut of 2 million barrels per day to its production target after weeks of lobbying by U.S. officials against such a move.

The move came even though fuel markets remain tight, with inventories in major economies at lower levels than when OPEC has cut output in the past.

The OPEC+ cut has raised concerns in Washington about the possibility of higher gasoline prices ahead of the November U.S. midterm elections, with the Democrats trying to retain their control of the House of Representatives and Senate.

U.S. President Joe Biden pledged earlier this week that "there will be consequences" for U.S. relations with Saudi Arabia after OPEC+'s move.

Read Also: Fed Officials Worried More About Doing Too Little on Inflation Than Too Much

Asked on Thursday about the situation during a Los Angeles trip, Biden told reporters "We're about to talk to them."

The OPEC+ decision was adopted through consensus, took into account the balance of supply and demand and was aimed at curbing market volatility, the Saudi foreign ministry said in a statement on Thursday.

The Saudi foreign ministry statement referred to consultations with the United States prior to the Oct. 5 OPEC+ meeting in which it was asked to delay the cuts by a month.

"The Kingdom clarified through its continuous consultations with the U.S. administration that all economic analyses indicate that postponing the OPEC+ decision for a month, according to what has been suggested would have had negative economic consequences," the Saudi foreign ministry statement said.

The United States accused Saudi Arabia of kowtowing to Moscow, which objects to a Western cap on the price of Russian oil in response to its invasion of Ukraine.

"We presented Saudi Arabia with analysis to show that there was no market basis to cut production targets, and that they could easily wait for the next OPEC meeting to see how things developed," said White House spokesman Jack Kirby, in a statement, which added that other OPEC nations told the United States that they felt "coerced" to support the Saudi decision.

The Saudi foreign ministry statement, quoting an unnamed official, stressed the "purely economic context" of the oil cut. Oil demand has weakened worldwide, with OPEC, the U.S. Energy Department, and the International Energy Agency all lowering forecasts for 2023 demand this week.

However, the IEA on Thursday added that OPEC's move could worsen demand, saying "higher oil prices may prove the tipping point for a global economy already on the brink of recession."

The Saudi statement said the kingdom views its relationship with the United States as a "strategic one" and stressed the importance of mutual respect. The Gulf Cooperation Council (GCC) issued a statement in support of Saudi Arabia's comments praising the kingdom's efforts to protect the market from volatility.

In research last week, Goldman Sachs said in the last 25 years OPEC has never cut production when inventories in Organization for Economic Co-operation and Development countries - composed of 38 of the world's richest economies - were so low. OECD stocks are currently 8% below their five-year average. However, they noted that OPEC reduced output during periods of weak demand.