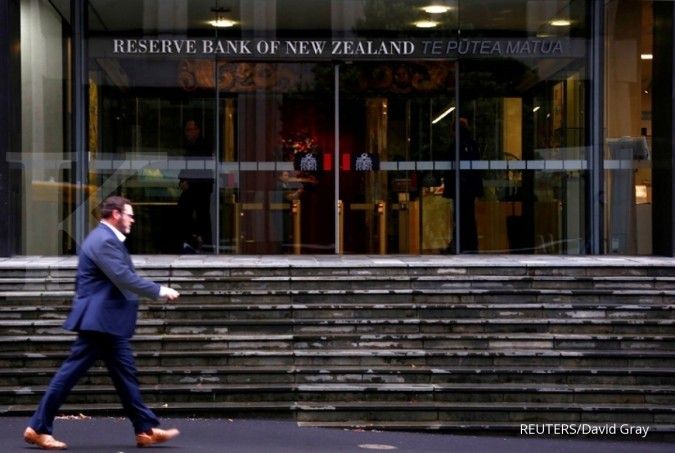 ILUSTRASI. A pedestrian walks past the main entrance to the Reserve Bank of New Zealand located in central Wellington, New Zealand, July 3, 2017. New Zealand's central bank surprised investors by holding interest rates at an all-time low of 1% on Wednesday.

Increases in wage growth and non-tradable inflation together with a weaker local dollar helped by an outsized 50 basis point cut in August, aided the Reserve Bank of New Zealand's (RBNZ)decision.

A majority of economists polled by Reuters had tipped an easing in the final policy meeting for the year.

Wednesday's surprise call not to cut startled doves, sending the kiwi more than 1% higher to $0.6422. If gains are sustained, this would be biggest one-day percentage rise since late January.

Even so, the kiwi is down about 4.7% since the start of this year.

"We expect interest rates to remain low for a long time and it's a global phenomenon," RBNZ Chief Economist Yuong Ha told reporters. "We'll keep watching the data and that will drive our decisions from here and we'll do what's required for that.

The RBNZ left the door ajar for further policy easing saying it was "prepared to act" if required. The central bank's own projections imply a 50/50 chance of a cut next year.

However, business sentiment remains subdued despite the policy easing. Economists expect at least one more cut to 0.75% as growth in the $200 billion economy is yet to pick up.

"Today's decision shows that the RBNZ is not afraid to stare down financial markets," Westpac chief economist Dominick Stephens said. "The RBNZ is certainly open to a February cut, depending on what happens to the data."

Stephens said there were two key factors that could swing the decision.

"First, we expect the housing market will be much stronger than the RBNZ expects. However, the global financial and economic situation could worsen again before February," he noted.

Capital Economics said the bank was too optimistic about the prospects for growth in New Zealand.

"The Reserve Bank of New Zealand sounded cautious when it left rates on hold today but we believe that a deterioration in the economy will force the bank to 0.5% by early next year," Capital Economics analyst Ben Udy said in a note.

The RBNZ's dual mandate includes targeting employment, which has put the spotlight on labour figures. Data released last week showed unemployment ticked up from a decade low but was still below the bank's forecast in August.