Gold Firms on Softer Dollar as Traders Strap in for U.S. Economic Data 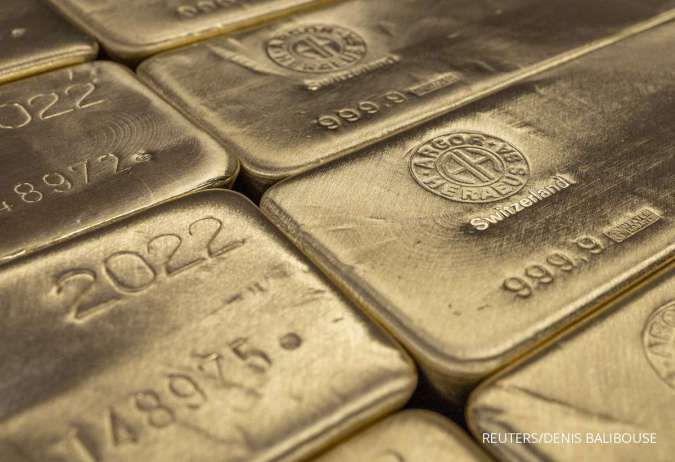 ILUSTRASI. Gold bars are pictured at the plant of gold and silver refiner and bar manufacturer Argor-Heraeus in Mendrisio, Switzerland, July 13, 2022.

Key hubs such as China and Hong Kong remain closed for the Lunar New Year holidays.

"Any signs of a weaker U.S. economy will be taken as a reason for the Fed to tighten less aggressively, and that could support gold, which would also take in safe haven flows," said Matt Simpson, a senior market analyst at City Index.

"Disappointing numbers likely to help gold climb above $1,960, but might not break through $2,000 in its first attempt, given the significance of the number."

Traders are mostly pricing in a 25-basis-point (bp) rate hike by the Fed at its Jan. 31-Feb. 1 policy meeting, after slowing its pace to 50 bps in December, following four straight 75-bp hikes.

Lower interest rates tend to be beneficial for bullion, decreasing the opportunity cost of holding the non-yielding asset.

On the physical front, India is expected to slash import duty on gold, which could lift retail sales ahead of peak demand season in the world's second-biggest bullion consumer.

Indian gold futures hit an all-time high on Tuesday, tracking gains in overseas markets and a depreciation in the rupee, but the surge dampened demand in the world's second-biggest consumer of the precious metal, dealers said.

With the Chinese economy reopening and less disruption from COVID-19, it could support a consecutive year of record photovoltaic silver demand, analysts at Heraeus Precious Metals said in a note.