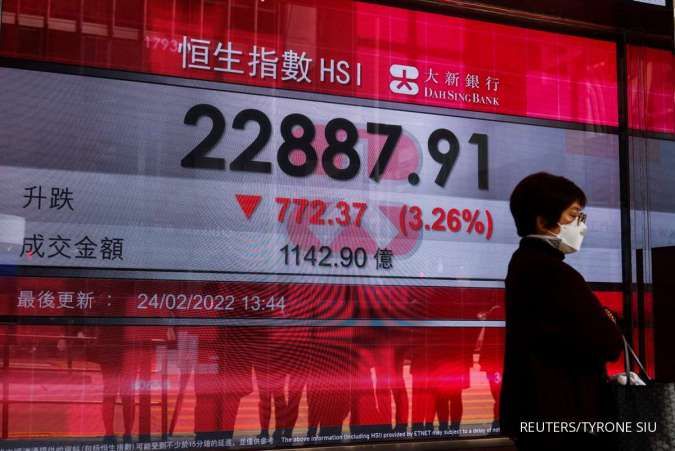 KONTAN.CO.ID - SYDNEY. Asian shares slipped on Monday ahead of a week thronging with central bank meetings and U.S. inflation data, while the euro eked out a gain on relief the far right did not win the first round of the French presidential elections.

French leader Emmanuel Macron and challenger Marine Le Pen qualified on Sunday for what promises to be a tightly fought presidential election runoff on April 24.

A Le Pen victory would be a similar jolt as Britain's Brexit vote to leave the European Union (EU). The result was close enough to leave the euro just a tick firmer at $1.0888, after an initial pop up to $1.0950.

S&P 500 stock futures and Nasdaq futures both dipped 0.2% in early trade. Earnings season kicks off this week with JP Morgan, Wells Fargo, Citi, Goldman Sachs and Morgan Stanley all due to report.

Wall Street, so far, has fared surprisingly well in the face of a vicious selloff in bonds which saw 10-year Treasury yields surge 31 basis points last week to be last at 2.72%.

Markets have raced to price in the risk of ever-larger rate hikes from the Federal Reserve with futures implying rises of 50 basis points at both the May and June meetings.

BofA's U.S. economist Ethan Harris now expects half-point hikes at each of the next three meetings and a cycle peak around 3.25-3.50%.

"If inflation looks like it is heading below 3%, then our current call should be hawkish enough," Harris said in a note. "Conversely, if inflation gets stuck above 3% then the Fed will need to hike until growth drops close to zero, risking a recession."

All of which underlines the importance of the March U.S. consumer price report on Tuesday where the median forecast is for a stratospheric rise of 1.2%, taking annual inflation to an eye-watering 8.5%.

Inflation will also be front and centre for the European Central Bank meeting on Thursday where the risk is for a hawkish slant to the statement.

"Inflation has jumped well above where the ECB thought it would be just one month ago," noted analysts at TD Securities "We expect a dramatic shift from the ECB, with the announcement of an early end to QE in May and setting the groundwork, but not quite committing to, a June hike."

Continuing the tightening theme, central banks in Canada and New Zealand could well raise rates by 50 basis points at their policy meetings this week.

The outsized rise in Treasury yields has seen the dollar index top 100 for the first time since May 2020, and it was last trading at 99.785.

The main casualty has been the yen as the Bank of Japan remains dedicated to keeping its policy super-loose and bond yields near zero. The dollar was up at 124.37 yen, having gained 1.5% last week to just below its recent peak of 125.10.

In commodity markets, thermal coal was the stand out winner last week with a rise of almost 13% after the EU banned imports of Russian coal.

Gold managed a weekly gain of 1.1% but has been undermined by the huge rise in bond yields and was last flat at $1,944 an ounce.