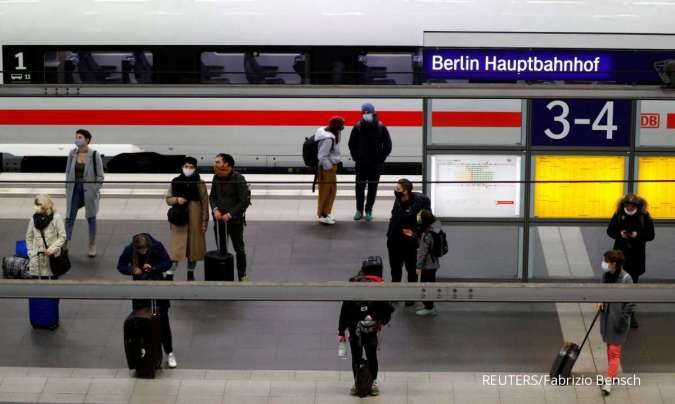 ILUSTRASI. Commuters wear face masks as they wait on a platform of the main train station Hauptbahnhof, as the spread of the coronavirus disease (COVID-19) continues, in Berlin, Germany.

KONTAN.CO.ID - BERLIN. Germany's leading economic institutes are slashing their 2022 growth forecast for Europe's biggest economy to 2.7% from 4.8% due to the impact of the war in Ukraine, two people familiar with the matter told Reuters on Tuesday.

The five institutes - the RWI in Essen, the DIW in Berlin, the Ifo in Munich, the IfW in Kiel and Halle's IWH - are due to release their joint forecast on Wednesday, amid spiking inflation and expectations for a dip in growth.

The institutes now see consumer prices jumping by more than 6% this year, compared with a previous forecast for 2.5%, issued in October 2021.

The more pessimistic outlook echoes other weak economic reports from Germany following Russia's invasion of Ukraine, which began on Feb. 24.

Late last month, the German government's council of economic advisers more than halved its 2022 growth forecast for Europe's largest economy to 1.8% and flagged a "substantial" recession risk as a result of fallout from the invasion.

The German institutes have a brighter outlook for 2023, though, lifting their estimates for gross domestic product (GDP) growth to 3.1% from 1.9%, the sources said, with inflation seen just below 3%.

That forecast would change, however, if there was an immediate stop to Russian energy imports, they warned. In such a case, Germany's economy could shrink by more than 2%, the institutes forecast according to the sources, adding that a deep recession was not ruled out.

The institutes' estimates form the basis for the government's own growth forecast which the economy ministry will present later this month.