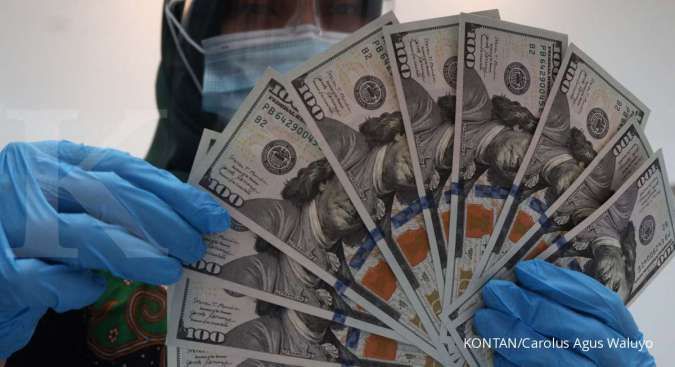 KONTAN.CO.ID - TOKYO. The dollar held near a one-month high against a basket of currencies on Wednesday as investors tried to ascertain if the Federal Reserve might alter the language on its stimulus following a recent jump in U.S. inflation.

U.S. retail sales dropped more than expected in May but sales in April were revised sharply up and are way above their pre-pandemic level.

With spending rotating back to services from goods as vaccinations allow Americans to travel and engage in other activities, the data cemented the perception of a strong recovery in the economy.

The Federal Reserve is widely expected to acknowledge the first conversations among its policymakers about when and how fast to pare back the massive bond-buying program launched in 2020 when it concludes a policy meeting later in the day.

Yet most investors think the Fed will refrain from any hints of starting tapering its stimulus in the near future.

"The Fed has said they're going to be reactionary to the data, ....and they’ve said they want to see extended inflationary conditions before they make any commitment to tapering or hikes," said Bart Wakabayashi, Tokyo branch manager at State Street Bank.

Wakabayashi said the dollar should rally if the Fed drops any hint that tapering will be brought forward or rate hikes are going to be looked at sooner, but added, "I think they’ll stick to the same tagline, and it will probably end up being a non-event."

Some market players also noted the dollar could rise by default as other major currencies appear to be losing momentum.

"We have to note that the U.S. dollar is strengthening now even as U.S. debt yield has dropped below 1.5%," said Makoto Noji, chief FX strategist at SMBC Nikko Securities.

"Today's currency market suggests there is strong potential pressure to lift the dollar, should there be some sort of surprises from the Fed."

The euro stood at $1.2126, little changed on the day but struggling to recover from its fall last week after the European Central Bank pledged to keep stimulus steady over the summer.

The yen was flat at 110.08 yen per dollar, near its two-month low of 110.325 touched earlier this month, with the Bank of Japan expected to extend some of its pandemic relief measures this week.

The British pound, a strong performer so far this year, hit a one-month low of $1.4035 on Tuesday despite stronger-than-expected employment data. It last stood at $1.4085.

The number of employees on British company payrolls surged by a record amount in May while pay growth marked its biggest rise since 2007 in April although statisticians warned that this was distorted by comparisons with depressed wages a year ago and greater job losses among low-paid staff.

While UK job recovery looks set to continue as the economy reopens, the rapid spread of the highly contagious Delta variant of the novel coronavirus, which forced Prime Minister Boris Johnson to delay his plans to lift lockdown, is seen as a risk.

The Australian dollar lacked traction after the country's central bank signalled on Tuesday its willingness to extend its bond purchase programme next month.

In crypto markets, bitcoin traded at $40,305, having hit a near one-month high of $41,341 on Tuesday, aided by the promise of fresh investment from major backer MicroStrategy and an upbeat tweet from Tesla boss Elon Musk.