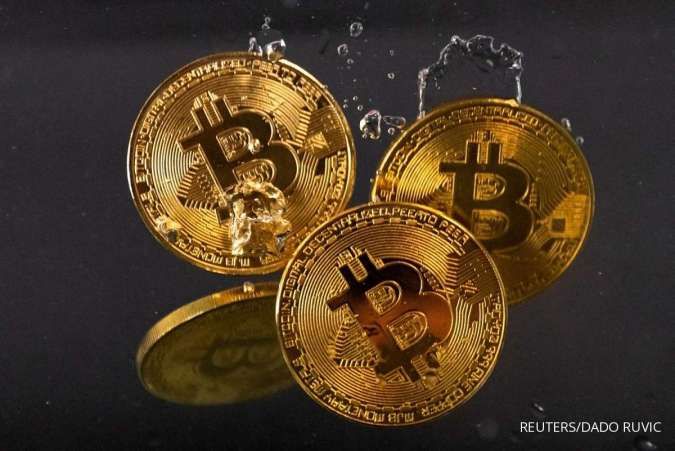 ILUSTRASI. Bitcoin fell as much as 14% on Monday

The Celsius move triggered a slide across cryptocurrencies, with their value dropping below $1 trillion on Monday for the first time since January 2021, sparking worries the rout might spill over into other assets or hit other companies.

"Almost anything can be systemic in crypto ... because the whole space is over-levered," said Cory Klippsten, chief executive of Swan Bitcoin, a bitcoin savings platform. "It's all a house of cards."

Celsius CEO Alex Mashinsky and Celsius did not respond to Reuters requests for comment.

New Jersey-based Celsius, which has around $11.8 billion in assets, offers interest-bearing products to customers who deposit cryptocurrencies with its platform. It then lends out cryptocurrencies to earn a return.

Companies exposed to cryptocurrencies have previously warned that declines in token prices could have ripple effects, including by triggering margin calls.

Crypto markets have dived in the past few weeks as rising interest rates and surging inflation prompted investors to ditch riskier assets across financial markets.

Markets extended a sell-off on Monday after U.S. inflation data on Friday, which showed the largest price increase since 1981, prompting investors to raise their bets on Federal Reserve rate hikes.

That was likely the key driver of the crypto market nosedive, Jay Hatfield, chief investment officer at Infrastructure Capital Management, wrote in a note on Monday.

"The Fed’s overexpansion of its balance sheet led to a number of bubbles including tech stocks, (and) crypto tokens," he said.

Cryptocurrency investors have also been rattled by the collapse of the terraUSD and luna tokens in May which was shortly followed by Tether, the world's largest stablecoin, briefly breaking its 1:1 peg with the dollar.

Baca Juga: Apple to Fund Pay-later Loans Off Its Own Balance Sheet

In a blog post on Monday, Tether said that while it has invested in Celsius, its lending activity with the crypto platform has "always been overcollateralized" and has no impact on Tether's reserves. The token was last trading flat at $1.

Also on Monday, BlockFi, another crypto lending platform, said it was reducing its staff by about 20% due to "dramatic shift in macroeconomic conditions." BlockFi said that it has no exposure to Celsius.

Celsius says on its website that customers who transfer their crypto to its platform can earn an annual return of up to 18.6%. The website urges customers to "Earn high. Borrow low".

In a blog post on Sunday evening, the company said it had frozen withdrawals, as well as transfers between accounts, "to stabilise liquidity and operations while we take steps to preserve and protect assets."

"We are taking this action today to put Celsius in a better position to honour, over time, its withdrawal obligations," the company said.

Celsius's token has fallen about 97% in the last 12 months, from $7 to around 20 cents, based on CoinGecko data.

Crypto lending products have surged in popularity and many companies have launched offerings within the last year.

That has sparked concerns among regulators who are worried about investor protections and systemic risks from unregulated lending products.

As of May 17, Celsius had $11.8 billion in assets, its website said, down by more than half from October, and had processed a total of $8.2 billion worth of loans.

Mashinsky, the CEO, was quoted in October last year saying Celsius had more than $25 billion in assets.

"We reached out to Celsius Sunday morning to discuss the acquisition of its collateralised loan portfolio. So far, Celsius has chosen not to engage," said Nexo co-founder Antoni Trenchev.

Celsius did not respond to a request for comment on Nexo's offer.