China Tops Forecasts With 8.1% Growth in 2021 But Headwinds Loom 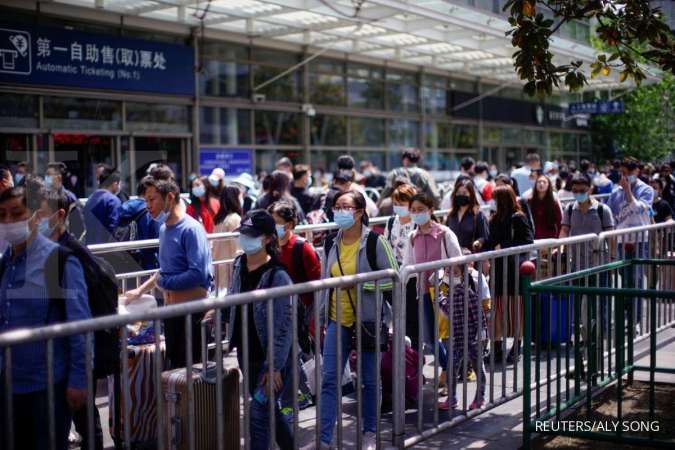 ILUSTRASI. China's economy rebounded in 2021 with its best growth in a decade.

KONTAN.CO.ID - BEIJING. China's economy rebounded in 2021 with its best growth in a decade, helped by robust exports, but there are signs that momentum is slowing on weakening consumption and a property downturn, pointing to the need for more policy support.

Growth in the fourth quarter hit a one-and-a-half-year low, government data showed on Monday shortly after the central bank moved to prop up the economy with a cut to a key lending rate for the first time since early 2020.

The world's second-largest economy is struggling with a rapidly cooling property sector, as well as sporadic small-scale COVID-19 outbreaks that could deal a blow to its factories and supply chains.

The economy grew 8.1% last year - its best expansion since 2011 - and faster than a forecast 8.0%. The pace was well above a government target of "above 6%" and 2020's revised growth of 2.2%. The economy recorded its weakest growth in 44 years in 2020 but staged a faster recovery than other major economies.

Gross domestic product grew 4.0% in the final quarter, National Bureau of Statistics (NBS) data showed, faster than expected but still its weakest pace since the second quarter of 2020. Growth was 4.9% in the third quarter.

"At present, the downward pressure on China's economy is still relatively big, and growth of residents' employment and income is restricted," Ning Jizhe, head of the NBS, told a news conference.

On a quarter-on-quarter basis, GDP rose 1.6% in October-December, compared with expectations for a 1.1% rise and a revised 0.7% gain in the previous quarter.

China's economy got off to a strong start in 2021 but economists expect growth to slow in the coming months.

The central bank unexpectedly cut the borrowing costs of its medium-term loans for the first time since April 2020, leading some analysts to expect more policy easing this year to guard against developers' mounting risk of defaults.

The People's Bank of China said it was lowering the interest rate on 700 billion yuan ($110.2 billion) worth of one-year medium-term lending facility (MLF) loans to some financial institutions by 10 basis points to 2.85%. It also cut the 7-day reverse repo rate.

"Economic momentum remains weak amid repeated virus outbreaks and a struggling property sector. As such, we anticipate another 20 bps of cuts to PBOC policy rates during the first half of this year," said analysts at Capital Economics, in a note.

But Nomura said in a note the space left for future rate cuts this year was small: "We expect another 10 bp rate cut before mid-2022."

In a video speech to a World Economic Forum event on Monday, President Xi Jinping said the overall momentum of China's economy was sound and that countries should strengthen policy coordination and prevent the world economy from dipping again.

Adding to another long-term concern for the economy, mainland China's birth rate dropped to a record low of 7.52 per 1,000 people in 2021, NBS data also showed on Monday, extending a downward trend that led Beijing last year to begin allowing couples to have up to three children.

China's property market has slowed in recent months as regulators stepped up a campaign to cut high rates of borrowing, triggering defaults at some heavily indebted companies.

Property investment dropped 13.9% in December from a year earlier, falling at the fastest pace since early 2020, according to Reuters calculations based on official data. Investment grew 4.4% in 2021, the slowest since 2016.

Weak consumption data also clouded the outlook, with retail sales in December missing expectations with only a 1.7% increase from a year earlier, the slowest pace since August 2020.

"The biggest challenge this year for policymakers is how to stabilise the economy at a 5-5.5% range against the backdrop of dynamic zero-COVID policy," said Nie Wen, chief economist at Hwabao Trust in Shanghai.

A bright spot was industrial output, up an annual 4.3% in December, picking up from a 3.8% increase in November, and better than a 3.6% increase in a Reuters poll.

China's refinery output hit a new record in 2021, as did aluminium and coal production.

Booming shipments to coronavirus-hit economies overseas were a key boost to China's growth last year, with net exports accounting for more than a quarter of GDP growth in Q4 and the country logging its biggest trade surplus in 2021 since records started in 1950.

The outsized role that net exports played in last year's GDP growth also underscored the relative weakness in other drivers. By contrast, net exports were a drag on overall growth in 2018, when the economy relied more on consumption and investment.

However, the support from export growth may not last. It has been slowing as an overseas surge in demand for goods eases and high costs pressure exporters.