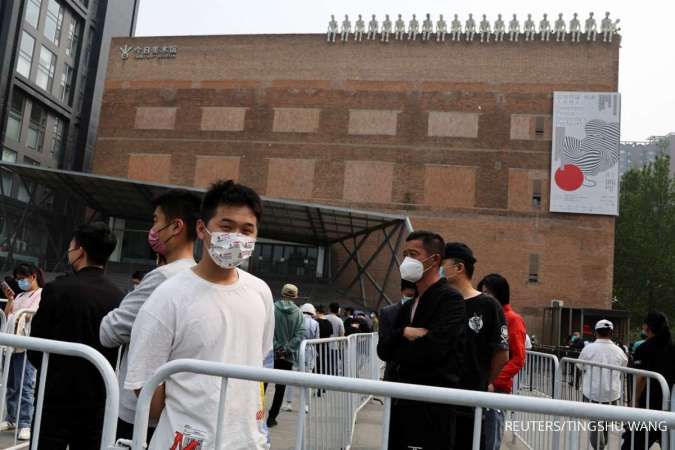 ILUSTRASI. New bank lending in China hit the lowest in nearly four and half years in April.

KONTAN.CO.ID - BEIJING. New bank lending in China hit the lowest in nearly four and half years in April as the COVID-19 pandemic jolted the economy and weakened credit demand, central bank data showed on Friday, after it pledged to step up support to ward off a sharper slowdown.

Chinese banks extended 645.4 billion yuan ($95.14 billion) in new yuan loans in April, down about 80% from March and dipping to the lowest level since December 2017, according to the People's Bank of China data.

The lending missed expectations by a wide margin, as analysts polled by Reuters had predicted new yuan loans would fall to 1.52 trillion yuan in April from 3.13 trillion yuan the previous month and against 1.47 trillion yuan a year earlier.

"Lending was much weaker than expected last month as lockdowns weighed on credit demand. This should nudge the PBOC to announce further easing measures soon," Capital Economics said in a note.

"But the central bank continues to signal a relatively restrained approach."

The central said the sharp slowdown in April new loans reflected the impact of the COVID on the real economy.

Full or partial lockdowns to stop the spread of COVID in dozens of Chinese cities, including a city-wide shutdown in the commercial hub of Shanghai, have hit the economy hard.

To cushion a sharp slowdown in economic growth, the central bank cut the amount of cash that banks must hold as reserves from April 25, and more modest easing steps are expected.

The central bank said on Monday it would step up support for the slowing economy, while closely watching domestic inflation and monitoring policy adjustments by developed economies.

But analysts say the room to ease policy could be limited by worries it could fuel capital outflows, as the Federal Reserve raises interest rates. Cutting borrowing costs may have only limited impact if consumers and businesses remain locked down.

"It is difficult to decide because cutting interest rates is not a direct way to help an economy that has been damaged by lockdowns," analysts at ING said.

"Fiscal measures would be more effective, and there are quite a few of them for small and medium-sized enterprises and individuals."

Broad M2 money supply grew 10.5% from a year earlier, central bank data showed, above estimates of 9.9% forecast in the Reuters poll. M2 grew 9.7% in March from a year ago.

Outstanding yuan loans grew 10.9% in April from a year earlier compared with 11.4% growth in March. Analysts had expected 11.4% growth.

Growth of outstanding total social financing (TSF), a broad measure of credit and liquidity in the economy, slowed to 10.2% in April from a year earlier and from 10.6% in March.