Boeing CEO does not want U.S. to take stake in company after coronavirus stimulus 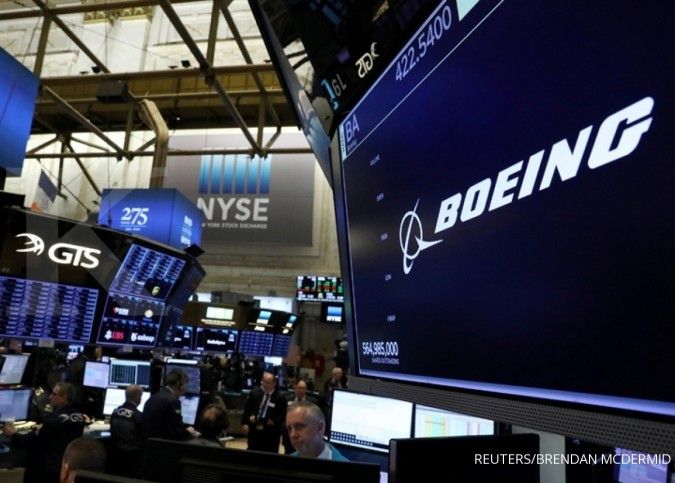 ILUSTRASI. The company logo for Boeing is displayed on a screen on the floor of the New York Stock Exchange (NYSE) in New York, U.S., March 11, 2019.

KONTAN.CO.ID - SEATTLE. Boeing Co Chief Executive Dave Calhoun said on Tuesday he does not want the U.S. Treasury to take an equity stake in the planemaker as a condition of government loans as credit markets freeze amid the coronavirus pandemic.

"I don't have a need for an equity stake," Calhoun told Fox Business. "If they force it, we just look at all the other options and we've got plenty of them."

Boeing has sought $60 billion in U.S. government loans for itself and the aerospace industry. Congress could reach agreement on a stimulus and rescue package worth up to $2 trillion to respond to the massive economic damage from the coronavirus pandemic as soon as today.

"There are a lot of options for us in the private markets etcetera, but the credit markets have to be open," Calhoun told CNBC, noting that Boeing "has $15 billion in the bank."

U.S. lawmakers have said they could demand equity, warrants or options as a condition of government loans.

"If they attach too many things to do it, of course you take a different course." he told Fox Business.

Calhoun said he wants the government to allow Boeing to borrow funds and the government would collect interest. "We want to pay everything back," he said.

Boeing shares rose nearly 16% on Tuesday, but the stock is still down more than 60% in the last month.

The ratings agency lowered the credit rating on the planemaker to ‘BBB’ from ‘A-‘ and now expects 2020 free cash flow in a range of negative $11 billion to $12 billion, down from a prior estimate of positive $2 billion.

Boeing said on Monday it will halt production for two weeks at its twin-aisle jetliner factory in Washington state due to the spread of coronavirus. It accounts for about 80% of Boeing's production, Calhoun said.

Calhoun said separately the 737 MAX is on track for a return to service for mid-year.

"We're very close to the finish line," Calhoun told CNBC of the plane that has been grounded for a year after two fatal crashes in five months.