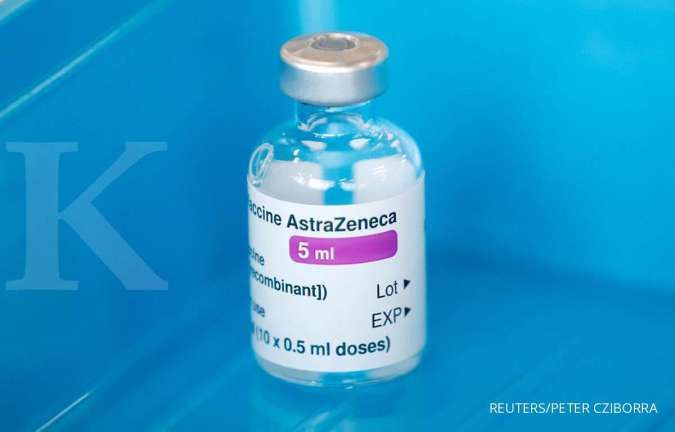 ILUSTRASI. A vail of the Oxford-AstraZeneca COVID-19 vaccine is seen at Basingstoke Fire Station, in Basingstoke, Britain February 4, 2021.

The vaccine boost came as Australia's second-most populous state neared the likely end of a five-day snap lockdown sparked by a fresh cluster of cases.

The federal government says it has ordered enough of the AstraZeneca vaccine, which will mostly be manufactured in Australia, to cover the country's population of 25 million people.

It has also ordered enough doses of a vaccine jointly developed by Pfizer Inc and BioNTech, which is being manufactured offshore, for a fifth of the population.

Chief Medical Officer Paul Kelly has previously acknowledged concerns about the relatively low efficacy of the AstraZeneca vaccine at around 62%, conceding it may not be enough to achieve herd immunity.

The first batch of the Pfizer-BioNTech vaccine, which has a 95% efficacy rate and has already been approved, arrived in Australia on Monday and authorities have planned the first inoculations for Feb. 22.

While countries including the United States and Britain were quicker to approve vaccines, using emergency status, Australia waited until it more complete testing data to grant provisional approval.

Meanwhile, Victoria state, home to a quarter of Australia's population, was on track to end a strict lockdown on Wednesday, authorities said, after reporting just two new infections in the previous 24 hours.

"This strategy is working," state premier Daniel Andrews told reporters. "We are well-placed to be able to make changes tomorrow night. These next 24 hours will be crucial."

Victoria went into its third lockdown on Friday after an outbreak linked to a quarantine hotel, involving 19 cases.

The lifting of lockdown means the Australian Open tennis tournament, which is being held in the state capital Melbourne, may resume admitting spectators who were barred during lockdown.

New South Wales, the country's most populous state, recorded its 30th day in a row without a locally acquired COVID-19 case.

Australia has reported a total of just under 29,000 COVID-19 cases and 909 deaths, with border closures and speedy tracking systems helping keep numbers relatively low compared with other developed countries.