Up to Twenty Killed in 5.6 Magnitude Earthquake in Indonesia - Local Official 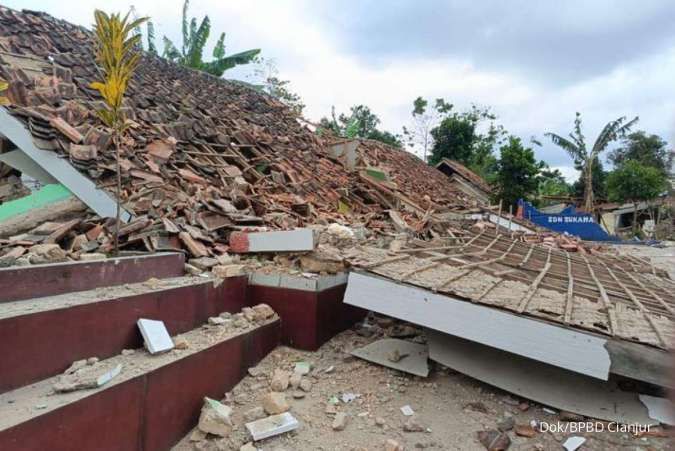 KONTAN.CO.ID - ​JAKARTA. Up to twenty people have been killed after a 5.6-magnitude earthquake rattled Indonesia's West Java province on Monday, a local official said.

Herman Suherman, a government official from Cianjur, the town in West Java where the epicentre of the quake was located, told news channel MetroTV that up to 20 people had died and 300 more were injured.

"This is from one hospital, there are four hospitals in Cianjur," he said, adding that it was possible the death and injury toll could rise.

Monday's quake struck on land in Cianjur, about 75 km southeast of the capital Jakarta, and at a depth of 10 km (6.2 miles), the weather and geophysics agency (BMKG) said, adding there was no potential for a tsunami.

In a statement the national disaster agency said several homes and an Islamic boarding school in the area had been damaged, as officials continued to assess the full extent of the damage.

Footage from Metro TV showed some buildings in Cianjur reduced almost entirely to rubble as worried residents huddled outside.

Muchlis, who was in Cianjur when the quake hit, said he felt "a huge tremor" and the walls and ceiling of his office building were damaged.

"I was very shocked. I worried there would be another quake," Muchlis told Metro TV, adding that people ran out of their houses, some fainting and vomiting in response.

In the two hours after the quake 25 aftershocks had been recorded, BMKG said.

In the capital Jakarta some people evacuated offices in the central business district, while others reported feeling buildings shake and seeing furniture move, Reuters witnesses said.

Indonesia straddles the so-called "Pacific Ring of Fire", a highly seismically active zone, where different plates on the earth's crust meet and create a large number of earthquakes and volcanoes.