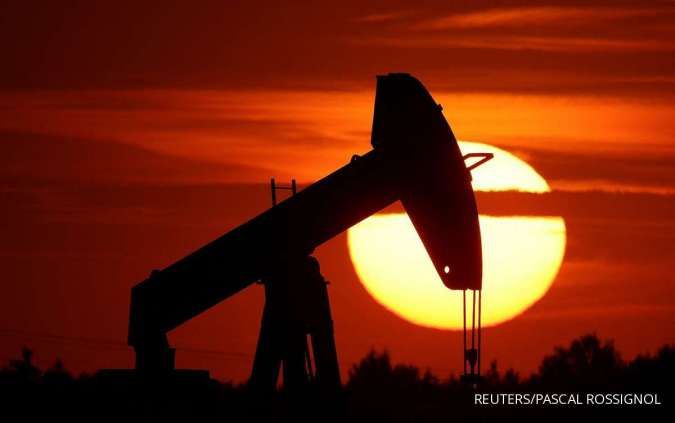 ILUSTRASI. Both oil benchmarks price rose sharply after a tanker was hit off the coast of Oman on Tuesday.

KONTAN.CO.ID - LONDON. Oil prices steadied on Wednesday, as geopolitical tensions following an attack on an oil tanker off the coast of Oman were offset by concerns over rising COVID-19 cases in China capped gains.

Both benchmarks rose sharply after a tanker was hit off the coast of Oman on Tuesday, sustaining minor damage, highlighting the geopolitical risks in the world's busiest routes for oil shipments.

Three maritime sources told Reuters that a drone was suspected to have attacked the tanker. An Israeli official said Iran was responsible for the attack, using a Shahed-136 drone, the type it has been supplying to Russia for use in Ukraine.

Oil prices settled higher on Tuesday after oil supply to parts of Europe via a section of the Druzhba pipeline was temporarily suspended, according to oil pipeline operators in Hungary and Slovakia.

The disruption was concurrent with an explosion in eastern Poland near the Ukraine border that killed two people and raised the possibility that the Russian-Ukraine conflict could spill over.

But after the initial "knee-jerk rally in oil prices, the tepid market follow-through reflects the significant prudence that will be taken to avoid an escalation," said Stephen Innes, managing partner at SPI Asset Management.

In China, rising COVID-19 cases weighed on sentiment after an easing of virus restrictions this week.

"Oil demand growth in the country is being hampered by its unyielding faith in a zero-tolerance COVID-19 policy and persistent economic weakness," PVM Oil analyst Stephen Brennock said.

The International Energy Agency (IEA) forecast demand growth to slow to 1.6 million bpd in 2023 from 2.1 million bpd this year.

By comparison, seven analysts polled by Reuters estimated on average that crude inventories dropped by about 400,000 barrels.

Official U.S. inventory data from the Energy Information Administration is due at 10:30 a.m. EST (1530 GMT).