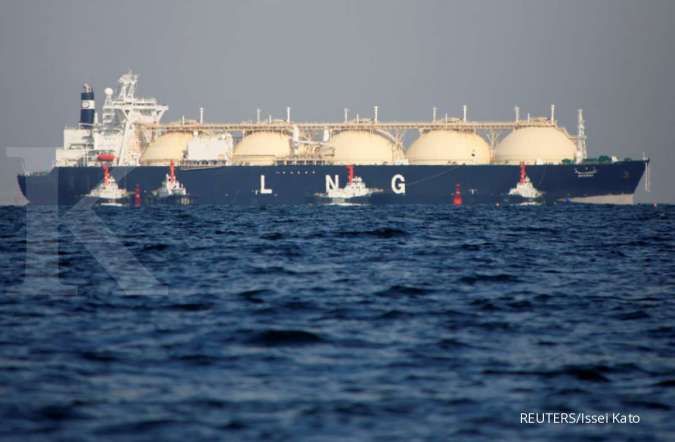 ILUSTRASI. A liquefied natural gas (LNG) tanker is tugged towards a thermal power station in Futtsu, east of Tokyo, Japan.

KONTAN.CO.ID - TOKYO. Japan plans to step up its investment role in upstream projects for liquefied natural gas (LNG), to spur new development and boost fuel offtake by its companies, the industry minister said on Friday.

Investment in new LNG development worldwide has dropped significantly as a global trend toward decarbonisation grows, although demand, especially in Asia, had risen, even before the Ukraine crisis, Koichi Hagiuda said.

"Russia's invasion of Ukraine has intensified competition for purchasing LNG, raising concerns about stable supply of the fuel for Japan," he told a news conference.

Read Also: Petrobras Shareholders Elect CEO-in-Waiting to Board after Weeks of Turmoil

"The government needs to come to the forefront to secure LNG through cooperation with private the sector."

The government aims to provide 'risk money' through the state-run Japan Oil, Gas and Metals National Corp (JOGMEC) for existing LNG projects that can boost output quickly via expansion, he said, but gave no details.

A meeting of G7 energy ministers early in March recognised the importance of investments in the LNG sector to ensure energy security, the minister added.

The Ukraine crisis, triggered by what Moscow has called a "special military operation", spotlighted Japan's role in the Sakhalin-1 and Sakhalin-2 energy projects in Russia, as Western oil majors have decided to pull out of the country.

Hagiuda has said Japan would hold the concessions in both projects as they are stable sources of long-term and inexpensive energy, but would also work to cut dependence on Russian energy by diversifying sources of supply.