Indonesian President Due to Meet Putin This Month -State Media 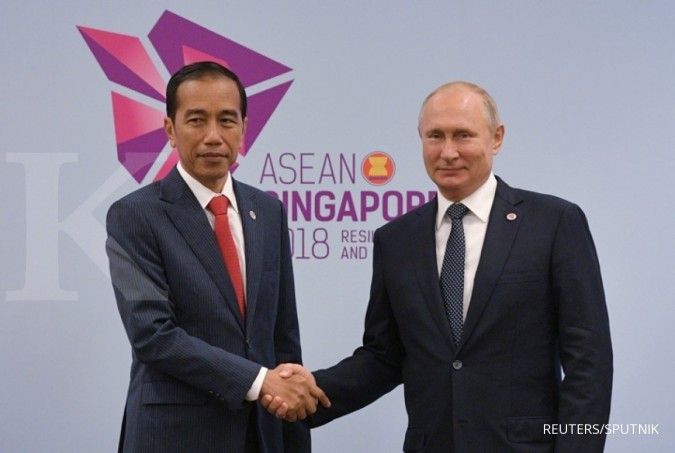 ILUSTRASI. Indonesian President Joko Widodo and Russian President Vladimir Putin attend a meeting on the sidelines of the ASEAN-Russia Summit in Singapore, November 14, 2018.

This year's meetings of the Group of 20 major economies have been overshadowed by the war in Ukraine, with Indonesia struggling to keep the group united as some Western countries threaten to boycott the summit and push for Russia's exclusion.

The Antara news agency reported that the Indonesian leader, widely known as Jokowi, was scheduled to meet Putin on June 30.

"Yes, that is the president's agenda," the coordinating security minister Mahfud MD told reporters at the presidential palace on Monday.

Jokowi is due to attend a Group of Seven (G7) summit in Germany taking place on June 26-28 before travelling to Moscow, with a stop in Ukraine also being considered, according to Indonesian media reports.

Teuku Faizasyah, a spokesman for Indonesia's foreign ministry, confirmed Jokowi would travel to Germany, though said "we are still in the process of finalising all relevant matters concerning the planned visit to other countries."

Indonesia in April announced that Ukrainian President Volodymyr Zelenskiy would also be invited to the G20 leaders' summit in Bali in November, but made it clear that it would not withdraw Putin's invitation. U.S. President Joe Biden, Canadian President Justin Trudeau and British Prime Minister Boris Johnson are among leders that have expressed opposition to the Russian leader joining.

Australian Prime Minister Anthony Albanese confirmed he would attend regardless during a visit to Jakarta this month.

The Indonesian president may also be looking to raise the issue of the Russian blockade of Odessa, which has significantly reduced food shipments out of Ukraine, one of the world's biggest exporters of wheat, maize and sunflower oil, political commentators said.