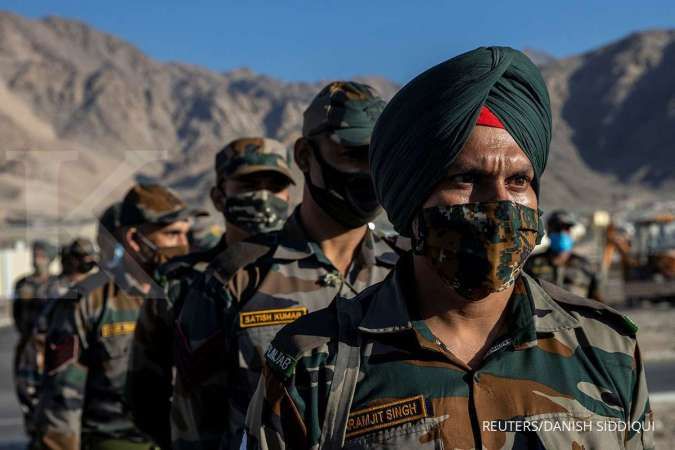 ILUSTRASI. Indian soldiers stand in a formation after disembarking from a military transport plane at a forward airbase in Leh, in the Ladakh region, September 15, 2020. REUTERS/Danish Siddiqui

Three Hindus and a Sikh were killed by suspected militants in Kashmir last week, prompting a police crackdown on what they said was the targeting of religious minorities.

At least five Indian soldiers and two militants were killed on Monday in a series of gun battles in Kashmir, next to the Jammu region which together comprise a federally administered territory.

The Himalayan region is claimed in full but ruled only in part by nuclear-armed neighbours India and Muslim-majority Pakistan.

In two separate gun battles in southern Kashmir on Tuesday, troops killed five suspected militants, including one connected to a killing of a Hindu in the region's main city of Srinagar, police said.

Kashmir valley's police chief, Vijay Kumar, said the five were from The Resistance Front (TRF), which Indian authorities believe is backed by Pakistan.

Islamabad denies the charge that it supports the insurgency in Kashmir, saying it only provides diplomatic and moral support for the Kashmiri people.

The violence has driven hundreds of Kashmiri Hindus out of the valley, including some of 4,000 who returned under a federal-government scheme after an exodus in the 1990s.

Sanjay Tickoo, a Hindu community leader based in Srinagar, said that more than 1,700 people had left.

"We won't go back ... unless the situation normalises," a Kashmiri Hindu employed by the government said at a protest in Jammu, declining to be identified.

Selanjutnya: Sydney reopens as Australia looks to live with Covid-19