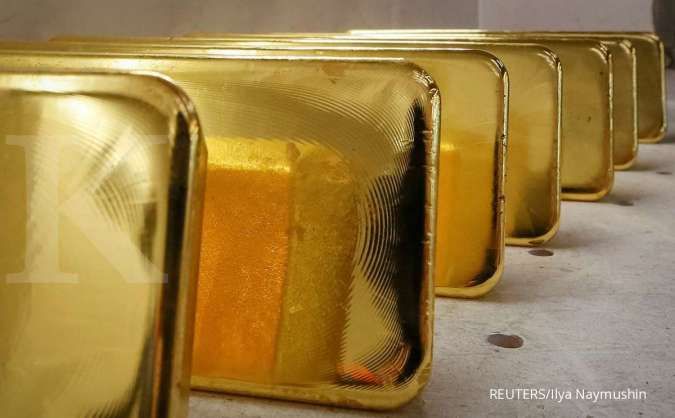 KONTAN.CO.ID - NEW YORK. Gold slipped on Monday as dollar strengthened on bets the Federal Reserve would not put off stimulus tapering, but stagflation expectations limited losses in the bullion that is perceived as a hedge against inflation.

Support for gold "could be coming from some people thinking we have some stagflation at the moment, which is when gold is at its best, as inflation goes higher," said Phillip Streible, chief market strategist at Blue Line Futures in Chicago.

The dollar held steady, hurting gold's appeal for those holding other currencies.

While the dollar's dominance could last until the Fed announces tapering, "the downside pressure on gold is starting to near its end, and we're approaching a peak where gold can finally stabilize and ultimately regain its historically longer bullish trend," said Edward Moya, senior market analyst at brokerage OANDA.

Palladium advanced 3% to $2,140.14 per ounce, with analysts attributing the bounce to short-covering after recent declines, while platinum was last down 0.5% at $1,021.02, after hitting a 2-month peak earlier. Palladium is seeing a technical rebound after prices hit support around $1,870, said ANZ analyst Soni Kumari.

"Fundamentals haven't changed much with auto sector continuing to face challenges due to micro-chip shortage. Until we see auto production recovering meaningfully, which will depend on availability of semiconductors, we expect PGMs (platinum group metals) to remain volatile," Kumari added. Platinum and palladium are used mainly in vehicle engines to reduce emissions.