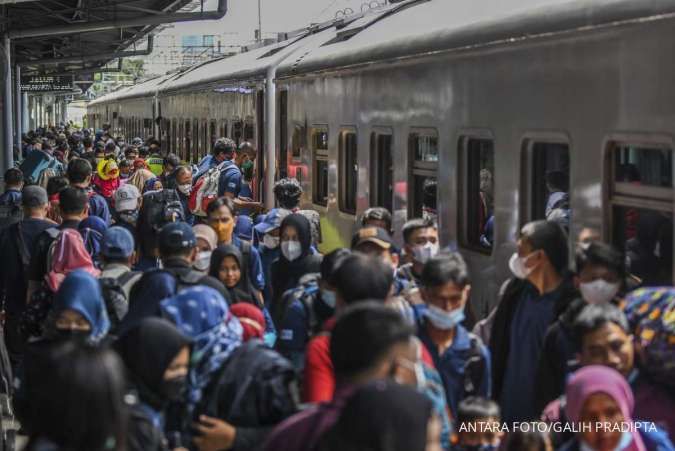 KONTAN.CO.ID - ​JAKARTA. Tens of millions of Indonesian Muslims are expected to travel back to their hometowns to celebrate Eid al-Fitr in coming days, with traffic jams of up to 10 km (6 miles) already starting to form on some routes out of the capital Jakarta.

The decision to once again allow mass travel home, known locally as "mudik", comes after authorities banned the tradition in the past two years to contain the spread of the coronavirus in the Southeast Asian nation of 270 million people.

Drone footage this week showed long lines of cars crawling along on either side of toll booths at one of the main highways out of Jakarta.

Passengers were also starting to throng train and bus stations to complete their trek home. "It will be nice to be able to see the family as... it's been two years and we haven't been able to go home," said Tri Wahyuni, 24, who was waiting at the Pasar Senen train station in Jakarta to head to her hometown of Lampung on Sumatra island.

For the past two years, the world's largest Muslim-majority nation has grappled with one of the highest rates of coronavirus infections in Asia, but in recent months it has loosened many of its pandemic restrictions after a sharp drop in infections.

Some local travellers, however, remained cautious about the risks from COVID-19, though pointed to higher vaccination levels and the lower caseload.

"Hopefully in the future, there will be no COVID. Hopefully we can go home every year," said Sri Suyanti, 35, another train passenger who was waiting with her daughters.