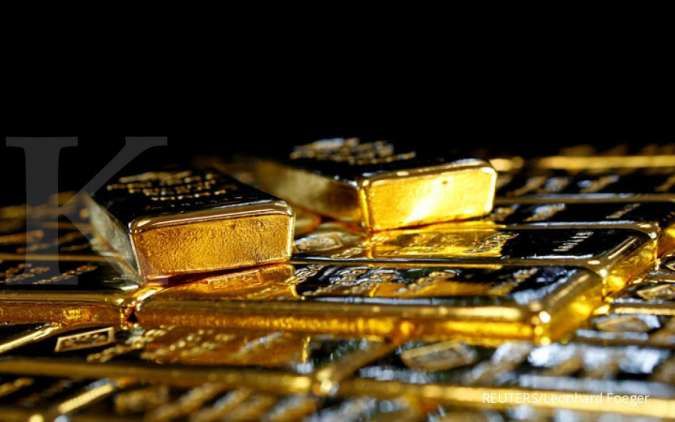 ILUSTRASI. Gold was set for a third weekly gain in four, as the lack of material progress in Russia-Ukraine peace talks lifted the safe-haven metal.

KONTAN.CO.ID - JAKARTA. Gold was set on Friday for a third weekly gain in four, as the lack of material progress in Russia-Ukraine peace talks lifted the safe-haven metal, although a spike in U.S. yields on fears of aggressive tightening measures dented bullion's appeal.

"I would assign the most recent gold gains to concerns about Ukraine starting to creep back in because we haven't had the kind of progress on talks that I think markets were hoping for around the beginning of the month," said Ilya Spivak, a currency strategist at DailyFX.

Ukraine's President Volodymyr Zelenskiy said on Friday that Ukrainians "need to achieve peace" and halt Russian bombardment that has forced millions to flee to countries such as Poland. Rising tensions in Ukraine stoked geopolitical uncertainty and demand for safe-haven assets such as gold.

"But the surge in yields and the Fed being seen as rather aggressive, that's kept that bounce from really gaining any meaningful momentum," Spivak said.

The U.S. Federal Reserve raised borrowing costs by 25 basis points on March 16, and since then top central bank policymakers have signalled a more aggressive approach to monetary policy tightening this year to fight rising inflation. Yields on the U.S. 10-year Treasury note stayed close to their 2019 highs, reducing the opportunity cost of holding non-paying bullion.

"Gold has shown more than once recently that prices climb slowly up the stairs, and then jump out of the 10th floor window, and I believe those risks remain," OANDA senior analyst Jeffrey Halley said in a note, while referring to gold's long-term price action.