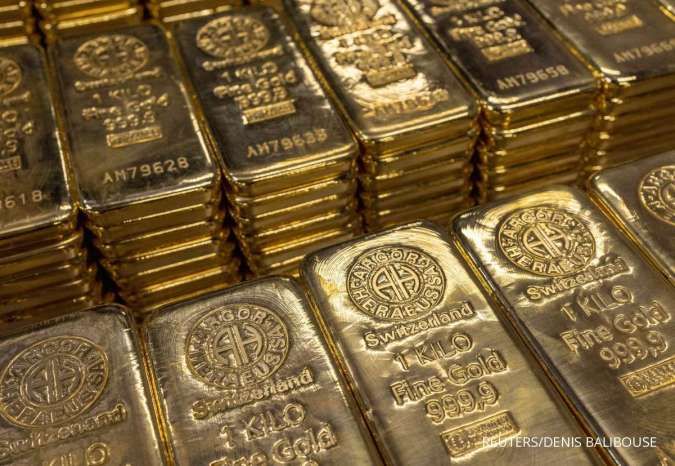 ILUSTRASI. One kilo gold bars are pictured at the plant of gold and silver refiner and bar manufacturer Argor-Heraeus in Mendrisio, Switzerland, July 13, 2022. REUTERS/Denis Balibouse

KONTAN.CO.ID - NEW YORK. Gold prices eased for a fourth consecutive session on Friday to their lowest since April 2020, as expectations of a hefty interest rate hike from the U.S. Federal Reserve next week boosted the dollar and Treasury yields.

Bullion is highly sensitive to rising U.S. interest rates as they increase the opportunity cost of holding the non-yielding metal.

"The dollar strength persists... the higher-than-expected U.S. CPI in August reaffirmed the market view that the Fed will at least hike rates by 75 basis points, which is weighing on gold prices," Bank of China International analyst Xiao Fu said.

"If gold falls below $1,600, there could be some buy on dips demand emerging, but the risks are definitely skewed to the downside."

Recent hawkish remarks from Fed policymakers and an unexpected rise in August U.S. consumer prices cemented bets for a 75-basis-point rate hike by the U.S. central bank at its Sept. 20-21 policy meeting.

"With central banks across the world set on policies that have already seen them hike rates significantly and are likely to continue for a number of months yet, gold's appeal has dwindled significantly," Kinesis Money analyst Rupert Rowling said in a note.

Gold prices have fallen more than $400, or nearly 20%, since crossing the key $2,000-per-ounce level in March. It was also headed for its biggest weekly percentage fall in two months, down about 3% so far this week.