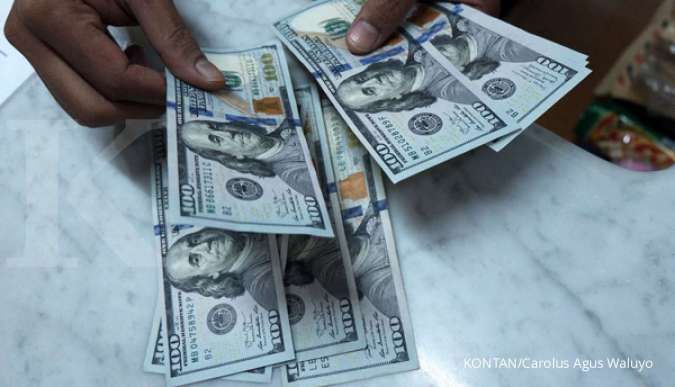 KONTAN.CO.ID - TOKYO. The dollar firmed on Friday and the euro wallowed near a four-week low against the greenback after the European Central Bank signalled further monetary easing by the end of the year.

The euro's overnight decline helped lift the U.S. dollar near four-week high against a basket of currencies.

The ECB kept interest rates steady on Thursday but committed to contain the growing fallout from a second wave of coronavirus infections, saying it would hone its response by its December meeting, as widely expected by the market.

"We agreed, all of us, that it was necessary to take action and therefore to recalibrate our instruments at our next Governing Council meeting," ECB President Christine Lagarde told a news conference.

"The economy in euro zone is deteriorating at a faster pace than expected, and some view that monetary easing won't be enough to lift the euro zone, or that it will be too late (in December). Such reactions probably pressured the euro to fall," said Masafumi Yamamoto, chief currency strategist at Mizuho Securities, noting that it will be difficult for the single currency to rise in the immediate future.

Against the yen, the common currency slightly eased at 122.08 yen.

Data on Thursday showed the U.S. economy grew at a record pace for the third quarter and an improving trend in jobless claims, while scars from the coronavirus recession still lingered.

U.S. gross domestic product rebounded at a 33.1% annualised rate last quarter, according to an advance estimate on Thursday, the fastest pace since the government started keeping records in 1947. Separately, a report showed 751,000 people in the United States filed for state unemployment benefits in the week ended Oct. 24, compared with 791,000 the previous period.

The dollar index rose to a four-week high overnight due to the euro's decline and U.S. data. It stayed near Thursday's level at 93.916 and was on track to post its second monthly gains.

Global coronavirus cases rose by over 500,000 for the first time as France and Germany falls back into coronavirus lockdowns next week. The United States also faces with rising cases in 47 states, and patients were overwhelming hospitals across the country.

Data due on Friday include euro zone's third-quarter gross domestic product and October inflation, while the U.S. awaits September personal consumption and expenditures as well as Chicago PMI.

The greenback was little changed against the Japanese yen at 104.55 yen, having rallied from a five-week trough overnight as it benefited from a rebound in U.S. treasury yields and broad dollar buying.

Sterling changed hands at 1.2927, undermined by a lack of Brexit-related headlines as London and the European Union have just two months to reach a post-Brexit trade agreement.

Across the Tasman Sea, the kiwi held steady, last fetching 0.6623 per dollar.