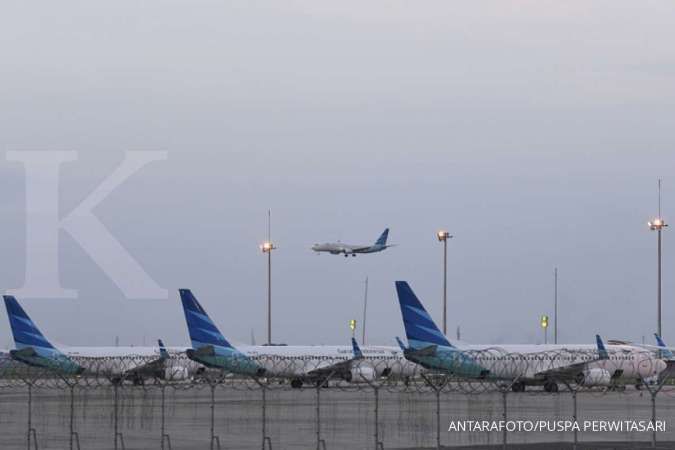 ILUSTRASI. A simple majority vote, provided it represents two-thirds of Garuda's liabilities held by creditors attending the meeting in a Jakarta court, will secure a binding agreement for all claimants.

KONTAN.CO.ID - JAKARTA. Garuda Indonesia's creditors including Britain's Rolls-Royce and European planemaker Airbus are voting on Friday on a $9.4 billion debt restructuring proposal, with the carrier confident of winning enough backing to move forward.

A simple majority vote, provided it represents two-thirds of Garuda's liabilities held by creditors attending the meeting in a Jakarta court, will secure a binding agreement for all claimants, which include holders of the airline's $500 million sukuk.

A total of 138.5 trillion rupiah ($9.35 billion) of claims will be recognised under the process, according to the latest court document, down from 142.4 trillion rupiah reported previously.

Garuda chief executive Irfan Setiaputra told creditors ahead of the vote he hoped for the best agreement for parties that "ensures future business collaboration".

Garuda has offered aircraft manufacturers, lessors, maintenance vendors, and Islamic bond investors, which hold the biggest chunk of liabilities, a large debt "haircut", or write-down, and to exchange the remaining amount with $825 million of 9-year bonds and $330 million equity.

It has also proposed that banks and state firms like fuel provider Pertamina and airport operators extend their loan maturity.

Setiaputra told creditors bond and equity offers had taken into account potential claims by Boeing related to Garuda's plan to terminate its order for 49 737 MAX 8 planes, even though the U.S. planemaker had not participated in the court process.

Boeing would be given an unspecified time period to put forward its claim, the CEO said, adding this amounted to $822 million.

If it did not do so, the offer to Boeing would be deducted from the total bonds and shares and the remainder would be prorated to other creditors, he said.

The CEO said on Thursday Airbus and engine manufacturer Rolls-Royce had backed the proposals. The companies had filed claims worth 9.9 trillion rupiah and 7.8 trillion rupiah, respectively, according to a court document.

Boeing and Airbus declined to comment, while Rolls-Royce did not immediately respond to a request for comment.

Garuda booked a $1.66 billon net loss in January-September of 2021, bigger than its loss in the same period a year earlier.

Garuda executives plan to focus on serving domestic routes and developing air freight to get the company back on track. The state-controlled airline has also announced rights issue plans after the court process that have been approved by the Indonesian parliament.