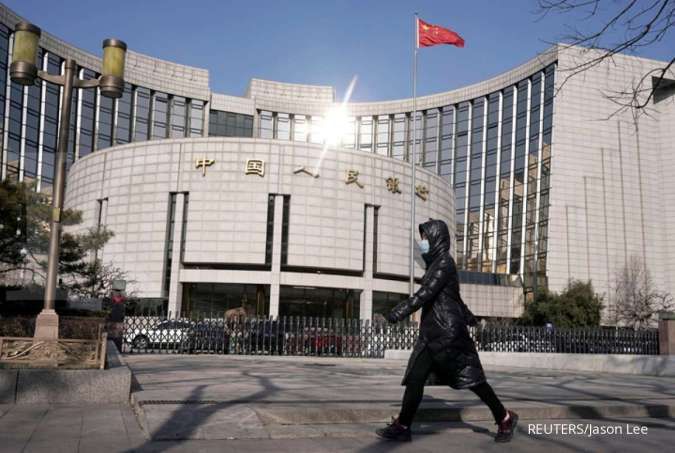 ILUSTRASI. A woman wearing a mask walks past the headquarters of the People's Bank of China, the central bank, in Beijing, China, as the country is hit by an outbreak of the new coronavirus.

KONTAN.CO.ID - BEIJING. China said on Friday it would cut the amount of cash that banks must hold as reserves for the first time this year, releasing about 530 billion yuan ($83.25 billion) in long-term liquidity to cushion a sharp slowdown in economic growth.

The People's Bank of China (PBOC) said on its website it would cut the reserve requirement ratio (RRR) for all banks by 25 basis points (bps), effective from April 25, but analysts said it might not yet be enough to reverse the slowdown.

Heightened global risks from the war in Ukraine and within China widespread COVID-19 lockdowns and a weak property market have triggered convulsions in the world's second-largest economy that are quickly spilling over into global supply chains.

China's exports, the last major driver of growth, are also showing signs of fatigue, and some economists say the risks of a recession are rising.

"I don’t think this RRR cut matters that much for the economy at this stage," said Zhiwei Zhang, chief economist at Pinpoint Asset Management, noting it was less than markets had expected.

"The main challenge the economy faces is the Omicron outbreaks and the lockdown policies that restrict mobility. More liquidity may help on the margin, but it doesn’t address the root of the problem," he said.

The PBOC said the latest RRR cut would boost the long-term funds for banks, enabling them to step up support for industries and firms affected by COVID-19 outbreaks, and lower costs for banks. It will cut financial institutions' annual funding costs by about 6.5 billion yuan.

The PBOC will also continue to keep liquidity broadly stable, while closely watching inflationary trends and policy changes made by developed countries, it said.

The weighted average RRR for financial institutions will be lowered to 8.1% after the cut, the central bank said.

Ting Lu, chief China economist at Nomura, expects another 25bp RRR cut before the year-end, most likely before mid-2022, before cutting RRR for some big banks that still have relatively high reserve ratios.

"We expect the PBOC to focus on increasing its direct credit support to small- and medium-sized enterprises, the agricultural sector, green investment, tech and elderly care via the MLF (medium-term lending facility), relending and rediscounting channels," Lu said.

The cut, which follows a broad-based reduction in December, had been widely expected after China's cabinet said on Wednesday that monetary policy tools should be used in a timely way to bolster growth.

China's economy rebounded strongly from a pandemic-induced slump in 2020 but cooled over the course of 2021 due to persistent property market weakness and strict measures to contain COVID-19 flare-ups, which hurt consumption.

The government's determination to halt the latest spread of record COVID-19 cases has clogged highways and ports, stranded workers and shut countless factories - disruptions that are ripping through global supply chains for goods ranging from electric vehicles to iPhones.

The government is targeting economic growth of around 5.5% this year as headwinds build, but some analysts say that may now be hard to achieve without more aggressive stimulus measures.

With other major central banks such as the U.S. Federal Reserve set to aggressively raise interest rates or already doing so, more forceful easing in China could spur potentially destabilising capital outflows as investors shift money to higher yielding assets.

Earlier on Friday, the PBOC kept the rate on its medium-term lending facility unchanged for a third straight month, as expected.