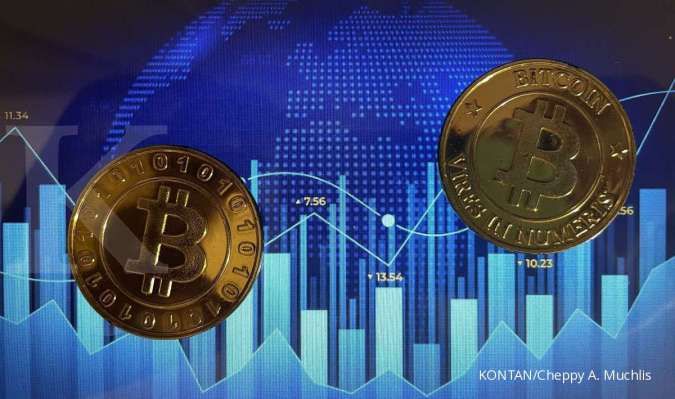 ILUSTRASI. The sell-off in the crypto market has coincided with an equities slide, as U.S. stocks suffered their biggest weekly percentage decline in two years.

KONTAN.CO.ID - JAKARTA. Bitcoin on Sunday rose around 7.6% to $20,404 from its previous close, signaling a recovery from a sharp drop on Saturday.

Bitcoin, the world's biggest and best-known cryptocurrency, is now up 16.7% from this year's low of $17,592.78 on June 18, when it tumbled on investor worries about growing troubles in the crypto industry and amid a general pull-back from riskier assets.

Andrew Brenner, head of international fixed income at National Alliance Securities, on Sunday said the rise in Bitcoin was likely the result of retail investors buying up the digital currency over the weekend, when few professional traders are working.

"Some buyers think now is a good time to get in because Bitcoin got down to a level which shows some near-term attractiveness," Brenner said. He added that Bitcoin and other digital currencies remained extremely volatile.

Ether, the coin linked to the ethereum blockchain network, on Sunday rose more than 13% to $1,131 from its previous close on Saturday, which at $993 marked Ether's lowest price since the beginning of this year.

The sell-off in the crypto market has coincided with an equities slide, as U.S. stocks suffered their biggest weekly percentage decline in two years on fears of rising interest rates and the growing likelihood of a recession.

Brenner said digital currencies were not a good investment at a time when the U.S. Federal Reserve tightens the supply of dollars by ending expansive monetary policy.

"As long as the dollar continues to show strength, digital currencies is not where you want to be," Brenner said.