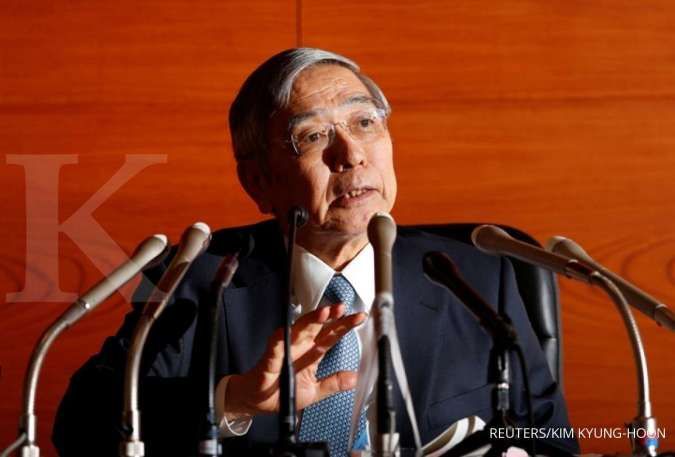 KONTAN.CO.ID - TOKYO. The Bank of Japan kept monetary policy steady on Thursday and slightly upgraded its view on the economy, suggesting that no immediate expansion of stimulus was needed to combat the coronavirus pandemic.

Markets are focusing on what BOJ Governor Haruhiko Kuroda will say at his post-meeting briefing on how the central bank could work with new Prime Minister Yoshihide Suga to support the economy with its dwindling policy tool-kit.

As widely expected, the BOJ maintained its -0.1% short-term interest rate target and a pledge to cap 10-year government bond yields around zero.

It also made no major tweaks to its asset-buying and lending programmes for easing corporate funding strains.

"Japan's economy remains in a severe state but has started to pick up as business activity gradually resumes," the BOJ said in a statement announcing its policy decision.

That was slightly more upbeat than its view at the previous rate review in July, when it said the economy was an "extremely severe state."

Suga became Japan's first new prime minister in nearly eight years on Wednesday, pledging to contain COVID-19 and push reforms after retaining about half of predecessor Shinzo Abe's lineup in his cabinet.

Analysts expect no major change to the relationship between the BOJ and an administration led by Suga who, as Abe's right-hand man, spearheaded the departing premier's strategy to revive the economy with bold monetary and fiscal measures.

"I'm interested to see what Kuroda may say about the BOJ's relationship with the new administration," said Masaki Kuwahara, senior economist at Nomura Securities.

"Probably Kuroda will play it safe and reiterate that it will continue easing, which as a result will have positive effects on policy mix between monetary and fiscal policies."

Japan suffered its biggest economic slump on record in the second quarter as COVID-19 hit demand, reinforcing expectations inflation will remain well below the BOJ's 2% target for years.

The BOJ eased policy twice this year, mainly by ramping up asset buying and creating a lending scheme to channel money to ailing small firms to cushion the blow from the crisis.