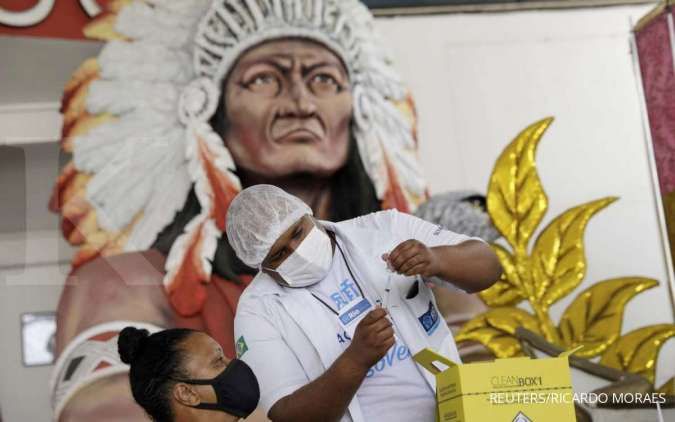 ILUSTRASI. The United States on Thursday will ship 3 million doses of the Johnson & Johnson one-shot COVID-19 vaccine to Brazil.

KONTAN.CO.ID - WASHINGTON. The United States on Thursday will ship 3 million doses of the Johnson & Johnson one-shot COVID-19 vaccine to Brazil, the country with the second-highest coronavirus death toll in the world, a White House official said on Wednesday.

The shipment - part of Washington's pledge to donate 80 million vaccines - will depart Fort Lauderdale, Florida, on an Azul Airlines flight Thursday evening, bound for Campinas, a city in southeastern Brazil about 100 km (62 miles) from Sao Paulo, the official said.

The donation comes as Brazil continues to battle the virus, which has claimed over half a million lives, aggravating deep political divides ahead of next year's presidential election and sparking unrest around the country. (Graphic on global cases and deaths) https://tmsnrt.rs/34pvUyi

The White House said scientific teams and legal and regulatory authorities from both countries worked together to ensure prompt delivery.

The one-shot J&J vaccine is seen as particularly helpful in ensuring effective vaccination rates in remote areas since it does not require a second dose.

The official said the vaccines had been cleared by the U.S. Food and Drug Administration (FDA) and would come from the supply that the United States had immediately available.

Brazil had already given regulatory approval to the J&J vaccine, providing the quickest path to getting a large number of doses to the country immediately, the official added.

Manufacturing of the J&J vaccines at Emergent BioSolutions Inc's Baltimore plant was halted in April by the FDA following a production error that led to millions of doses being ruined.

The White House official underscored that the doses being shipped to Brazil were safe and stressed they came with no strings attached for the government of President Jair Bolsonaro.

"We are sharing these doses not to secure favors or extract concessions. Our vaccines do not come with strings attached. We are doing this with the singular objective of saving lives," said the official.