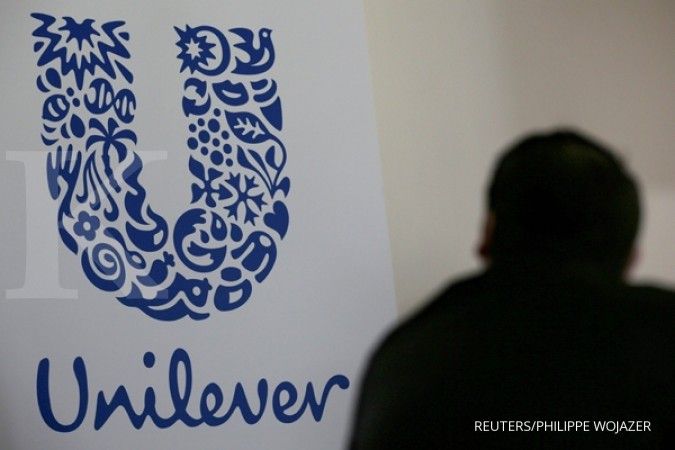 ILUSTRASI. The logo of the Unilever group is seen at the Miko factory in Saint-Dizier, France.

The warning dragged shares of the FTSE-listed company down 4.2% making it the biggest loser on the index in morning trading.

Underlying sales for the maker of Dove soap and Hellmann's mayonnaise rose 5% in the three months that ended June 30, beating the 4.8% analysts had expected, according to a company supplied consensus.

Half-year sales came in 5.4% higher, above the 5.3% forecast, propelled by 8.1% growth in its Foods and Refreshment division, as living restrictions began to ease in many markets.

In Europe, ice-cream eaten out of home grew double-digits while it also saw strong consumption in markets like Turkey, China and India. Sales of teas, including Lipton and PG Tips, also generated strong volume growth in North America, Turkey, Europe and India.

"We believe full-year outlook will land well within the 3-5% growth range with our biggest focus on competitive growth, Chief Financial Officer Graeme Pitkethly said on a media call.

He played down, however, expectations for margin growth due to a strong jump in prices of commodities including crude, palm and soybean oil, that hit margins in its personal and home care business.

The 112 billion pound ($153.93 billion)company's results come at a time of a controversy over its U.S. subsidiary Ben & Jerry's move to end ice-cream sales in occupied Palestinian territories that has caused a backlash against the brand in Israel. The roll-out of COVID-19 vaccinations, the re-opening of developed economies and nearly $6 trillion in U.S. government relief since the pandemic's outbreak are fuelling demand for everything from cars to restaurant meals, straining the supply chain, creating labour shortages and driving up commodity prices.

The company said it now expected full-year underlying operating margins to be flat compared to slightly up earlier, citing "more incremental inflation than we saw in the first quarter." The group also said it had completed the review of its tea business, and anticipates either an initial public offering, sale or partnership before the end of October 2021.

Underlying earnings per share for the company that counts Lipton teas and TreSemme shampoo among the 400 brands it sells, came in at 1.33 euros for the first half, also beating the 1.24 euro ($1.46) average estimate. Underlying operating margin fell 1 percentage point to 18.8%, less than the 1.2 percentage point drop analysts had been expecting.

Overall, first-half turnover came in at 25.8 billion euros, a touch above the 25.7 billion euros analysts had expected.

Read Also: Oil climbs over 4% despite rise in U.S. inventories