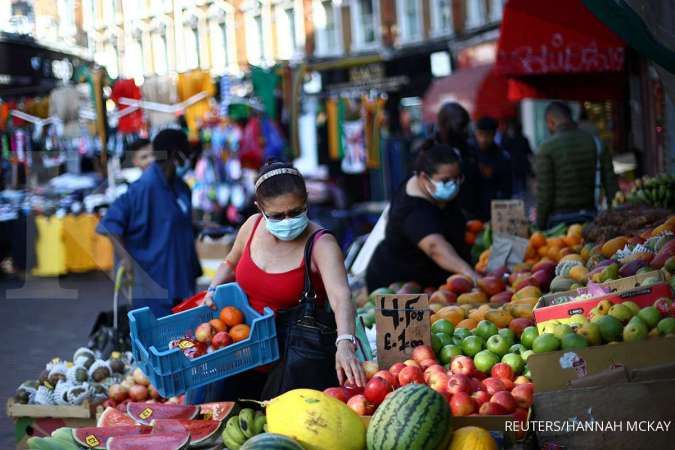 KONTAN.CO.ID - LONDON. Britain's recovery from the coronavirus lockdown lost some momentum this month, a business survey showed, as consumer-facing sectors suffered from the end of a government subsidy to support restaurants and more general COVID-related worries.

The IHS Markit/CIPS flash composite Purchasing Managers' Index (PMI) dropped to a three-month low of 55.7 in September after hitting a six-year high of 59.1 in August, a slightly larger drop than economists had forecast in a Reuters poll.

The preliminary survey, published on Wednesday, still showed strong growth in Britain's services and manufacturing sectors, but reflected a slowdown in new orders and the weakest confidence about future output since May.

British gross domestic product fell more than 20% during the second quarter, the biggest drop of any G7 economy, and the Bank of England expects third-quarter output to be around 7% below its level before the crisis.

"The drop in the (PMI) suggests that the recovery has already started to flatten out," said economist Thomas Pugh at Capital Economics.

British businesses performed better than those in the euro zone, where PMI data on Wednesday showed growth ground to a halt in September due to a resurgence in COVID-19 cases.

"Reinstating restrictions on business opening hours and encouraging people to work from home again could cause the recovery to stall completely in Q4," Pugh said.

Businesses in the survey said they were reducing staff numbers for a seventh consecutive month -- the longest such run since 2010 and one which bodes poorly for many workers when government job support measures expire at the end of next month.

Britain's central bank forecast last month that unemployment would jump to 7.5% in the final three months of this year from 4.1% during the three months to July.

The change in the government's approach, less than a month after it was offering half-price incentives for people to dine in restaurants and discouraging working from home, comes after a big rise in new COVID-19 cases, also seen elsewhere in Europe.

Testing capacity has come under strain since schools in England reopened at the start of September.

IHS Markit said the weakening in growth was concentrated in sectors that relied on consumer demand, and services activity slowed more than manufacturing.

"The restaurant sector in particular saw demand fall sharply as the Eat Out to Help Out scheme was withdrawn," Chris Williamson, chief business economist at IHS Markit, said.