UK unveils US$ 420 billion lifeline for firms hit by coronavirus 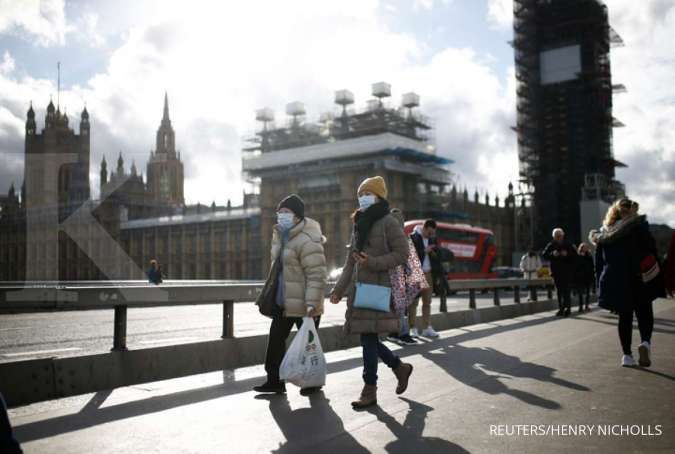 ILUSTRASI. The Houses of Parliament can be seen as people wearing protective face masks walk across Westminster Bridge

KONTAN.CO.ID - LONDON. Britain said it would launch a £ 330 billion (US$ 399 billion) lifeline of loan guarantees and provide a further £ 20 billion in tax cuts, grants and other help for businesses facing the risk of collapse from the spread of coronavirus.

Finance minister Rishi Sunak again pledged to do "whatever it takes" to help retailers, bars and airports and other firms, many of which are reeling from a near-shutdown of business.

"This is not a time for ideology and orthodoxy," Sunak said on Tuesday, speaking alongside Prime Minister Boris Johnson. "This is a time to be bold, a time for courage."

Britain, criticised by some scientists for moving too slowly to check the spread of the virus, ramped up its response on Monday when it told people to avoid pubs, clubs, restaurants, cinemas and theatres.

On Tuesday, it announced plans to cancel routine surgery for three months to focus the health service on the coronavirus and courts in England and Wales dealing with serious crimes will not start trials likely to last for more than three days.

"We must act like any war-time government and do whatever it takes to support our economy," Johnson said.

The coronavirus death toll in Britain rose by 16 to 71.

Sunak described Tuesday's package of measures as unprecedented, although Britain issued guarantees of around 1 trillion pounds during the global financial crisis.

The Institute for Fiscal Studies, a think-tank, said Sunak would need to "come back with more" and Allan Monks, a JP Morgan economist, said excluding the loan guarantees, the size of Britain's stimulus measures for this year was "likely to look small compared to the economic shock underway."

Sunak said he was including all retail, hospitality and leisure businesses in the suspension of a property tax, alongside the new loan guarantee programme which was equivalent to 15% of British economic output.

Companies from those sectors would be offered cash grants and the government would discuss a support package for airlines and airports.

Britain's biggest airports including Heathrow and Gatwick have warned that they face the threat of a complete shutdown without government help.

Banks and lenders would offer a three-month mortgage holiday for people in difficulty, Sunak said.

He later told lawmakers, some of whom criticised the business focus of the plan, that the government would soon make a statement about support for renters. He also said he would do more to support jobs and incomes.