Spain enters COVID state of emergency to much dismay 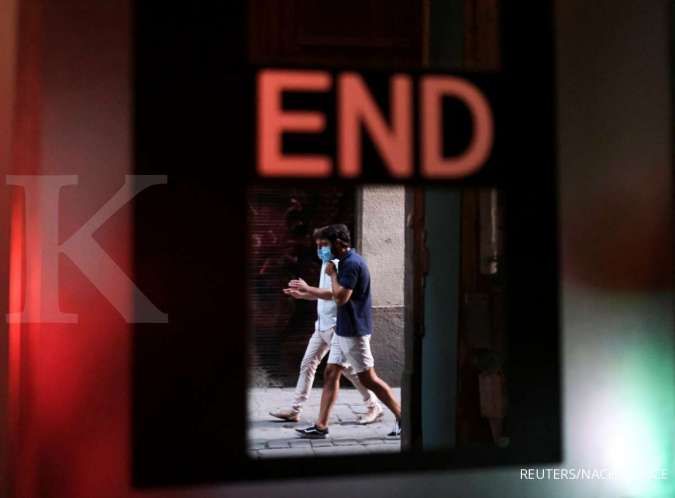 ILUSTRASI. The Spanish government faced a backlash over its plans to put a six-month state of emergency.

KONTAN.CO.ID - MADRID. The Spanish government faced a backlash on Monday over its plans to put one of Europe's worst COVID-19 hotspots under a six-month state of emergency.

Opposition parties said six months was too long, epidemiologists said this may be too little too late, and some citizens balked at nightly curfews.

"The curfew doesn't make much sense. Does the virus only infect people between 2300 and 0600? No," said Marta Aragoneses, a 36-year old schoolteacher, enjoying a cigarette outside a cafe in La Latina.

Nearby, Mariano Moreno de Guerra, a pharmacist on his way to work in La Latina, said what worried him was plans for a six-month state of emergency.

"I don't like what they've done at all," he said. "They are acquiring a taste for confining people and that could be dangerous. Extending it by six months is an absolute outrage. I see a lot of potential for abuse."

Political wrangling between the central and regional governments and between the minority government and opposition has for months hampered the response to the pandemic in Spain.

This has in turn angered many Spaniards, with analysts saying that the uncertainty could eventually hurt willingness to comply with the measures.

The nationwide curfew is set to last until at least Nov. 9, while the government said on Sunday it would seek parliament's approval for the state of emergency to last six months and give each region the right to take its own measures to tackle the pandemic, including limiting people's movements.

The curfew applies to all of Spain except the Canary Islands between 11 pm and 6 am - with regions having the authority to start the curfew an hour earlier or delay it to midnight.

People are not allowed to move around at those hours unless for specific reasons, including work or needing to go to the pharmacy

Both the main opposition party, the conservative People's Party (PP), and the center-right Ciudadanos said on Monday they would back a state of emergency, but not for that long.

PP leader Pablo Casado said his party would agree to as much as eight weeks but no more, and with a set of conditions that would include modifying legislation to allow for limits on the movement of people to tackle the pandemic to be decided without needing to resort to a state of emergency.

The curfew was announced by Prime Minister Pedro Sanchez, a socialist, on Sunday after other European countries with fewer cases took that step.

"The measures in Spain are reactive, dragging our feet, with the feeling that there's no evaluation of whether they work and that something is done only because others took those steps," said Pablo Simon, a political science professor at Madrid's Carlos III university.

Spain took harsher measures with the first wave of the pandemic from March more or less through to June, including a lockdown that obliged people to stay home during the day.