Shares of Indonesia's Mitratel down on trading debut 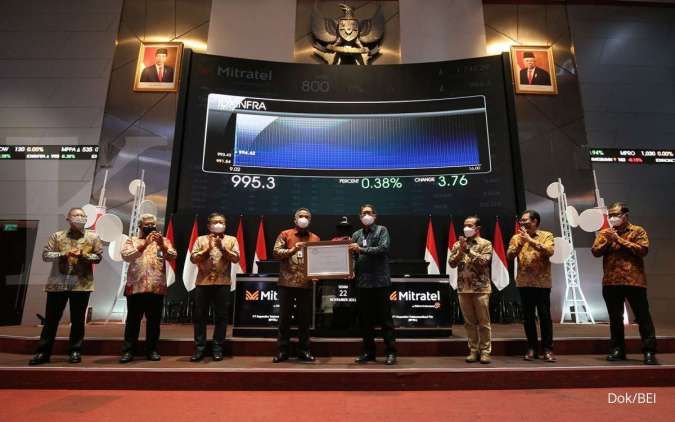 On Monday, 22 November 2021, the shares of PT Dayamitra Telekomunikasi Tbk. (MTEL) is officially listed on the Main Board of the Indonesia Stock Exchange (IDX).

KONTAN.CO.ID - JAKARTA. Shares of PT Dayamitra Telekomunikasi (Mitratel), a unit of Telkom Indonesia, fell as much as 3.12% on its trading debut on Monday, after launching the second biggest IPO this year.

The shares traded as low as 775 rupiah a piece on Monday, down from 800 rupiah price set at for its initial public offering last week, where the company raised a total of 18.79 trillion rupiah ($1.32 billion).

The share price has since steadied at around 785-790 rupiah.

The telecom tower operator initially aimed to raise up to 24 trillion rupiah through the IPO.

The company planned to use most of the proceeds from the share sale for expansion, including for "strategic acquisition of quality tower portfolio in Indonesia," it said in its prospectus.