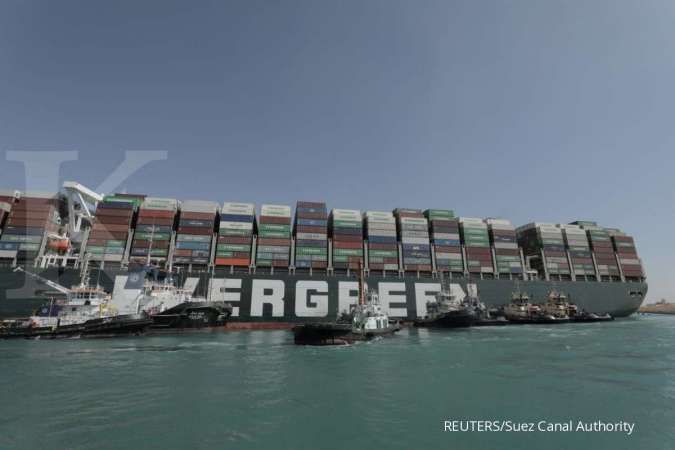 ILUSTRASI. Stranded ship Ever Given, one of the world's largest container ships, is seen after it ran aground, in Suez Canal, Egypt March 28, 2021.

KONTAN.CO.ID - TOKYO. Oil slumped more than 2% on Monday after news from the Suez Canal that salvage crews have managed to move the giant container ship that has been clogging up the vital global trade passage for nearly a week.

The stranded container ship Ever Given has almost been completely floated and will be inspected before it is moved, a shipping source with knowledge of the matter told Reuters on Monday.

Hundreds of other container ships, bulk carriers and oil-laden tankers remain backed up at both ends of the canal, but news of the ship's movement immediately sent oil prices sharply lower after they had traded slightly down for the morning.

Oil prices have swung wildly in the last few days as traders and investors tried to weigh the impact of the blockage of a key trade transit point and the broader effect of lockdowns to stop coronavirus infections.

Prices are getting some support from expectations that the Organization of the Petroleum Exporting Countries and its allies will maintain lower output levels when they meet this week.