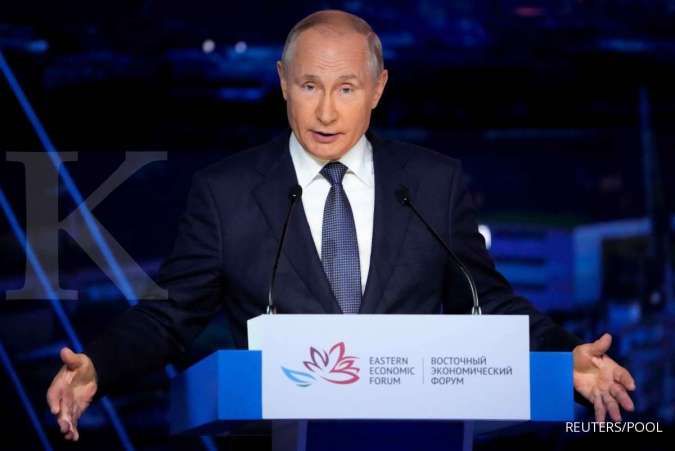 KONTAN.CO.ID - LONDON. Russia's invasion of Ukraine triggered a burst of credit rating moves on Friday, with Moody's putting Russia on review for a downgrade to 'junk' status and Fitch swiftly cutting Ukraine on worries it may now default.

Both countries' financial markets have unsurprisingly been thrown into turmoil by the events this week, which mark the biggest military attack in Europe since World War Two and have seen Moscow hit with stiff Western sanctions.

Russia currently has an "investment grade" rating of Baa3 with Moody's and an equivalent BBB- at S&P Global and Fitch, due to one of the lowest debt levels in the world at just 20% of its GDP, and nearly $650 billion of currency reserves.

A downgrade, however, would lower that rating to the riskier "junk" or sub-investment grade category.

"The decision to place the ratings on review for downgrade reflects the negative credit implications for Russia's credit profile from the additional and more severe sanctions being imposed," Moody's said in a statement.

Sovereign rating reviews can take months but this time it is likely to be quicker. Moody's said its decision would be based on the scale of the military conflict and the severity of additional Western sanctions, which have already hit some of Russia's top banks, military exports and members of President Vladimir Putin's inner circle.

It added it would also take into account the degree to which Russia's substantial currency reserves are able to mitigate the disruption brought about by the new sanctions and a protracted conflict.

"Moody's will look to conclude the review when these credit implications become more clear, particularly when the impact of further sanctions takes shape in the coming days or weeks," the agency said.

Moody's also put Ukraine's already-junk "B3" rating on review for a downgrade.

Fitch, however, didn't wait and moved immediately to slash its Ukraine's rating by a whole three notches to "CCC" from "B".

Explaining the move it said, "There is a high likelihood of an extended period of political instability, with regime change a likely objective of President Putin, creating heightened policy uncertainty and potentially also undermining the willingness of Ukraine to repay debt."

Moody's had also warned a heavy conflict could leave Kyiv struggling to make debt payments. Scope, a smaller European rating agency, has estimated Ukrainian government debt could jump above 90% of GDP by 2024 from around 50% now while S&P Global on Friday also warning of a spate of downgrades as a result of the war.

The head of International Monetary Fund Kristalina Georgieva said on Friday it was exploring all options to aid Ukraine with further financial support.

Russia's central bank has beefed-up its banking sector with billions in additional foreign exchange and rouble liquidity, while the government there has separately pledged full-scale support to the sanctions-hit companies.

If Russia is cut to junk it won't be the first time. Moody’s and S&P both took similar steps back in early 2015 after the annexation of Crimea and plunging oil prices caused a rouble currency crisis.

There are "serious concerns" around Russia's ability to manage the disruptive impact of new sanctions on its economy, public finances and financial system, Moody's said on Friday.