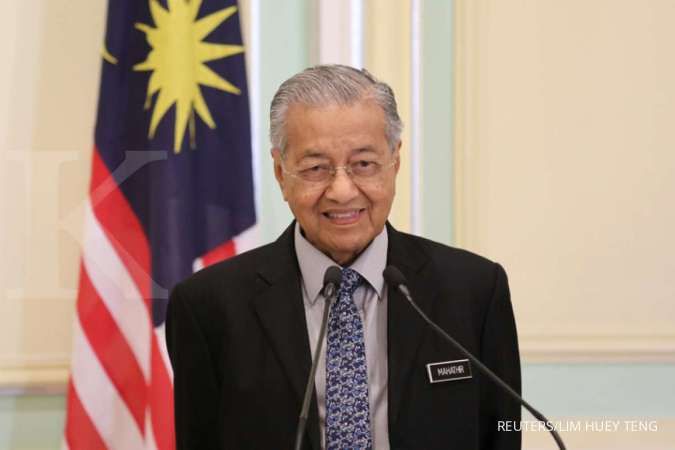 KONTAN.CO.ID - KUALA LUMPUR. Malaysia's Mahathir Mohamad went back to work on Tuesday with the new title of interim prime minister, a day after he resigned the leadership in a shock move that plunged the country into political turmoil.

Mahathir, who at 94 is the world's oldest government leader, made no comment as he arrived by car at his office in Putrajaya. He disbanded his entire cabinet late on Monday after resigning as prime minister and agreeing to a request from Malaysia's king to stay on until a successor is named.

Mahathir's resignation broke apart an already fragile coalition with old rivals including Anwar Ibrahim, 72, that had scored a surprise election victory on an anti-corruption platform in 2018 but has since become increasingly unpopular.

It was not immediately clear how long Mahathir would remain in the interim role, when a new cabinet would be appointed or how the next government would be formed.

"For Malaysians, the trauma of uncertainty is hard to overstate," the pro-establishment New Straits Times newspaper wrote in an editorial.

The political crisis comes at a particularly bad time for the Malaysian economy, after growth fell to a decade low in the final quarter of last year. Mahathir had been scheduled to announce a stimulus package to deal with the coronavirus outbreak on Thursday.

The resignation left in doubt the pre-election promise Mahathir had made to Anwar that he would cede power before his five-year term ended in 2023.

It followed a sudden burst of political wrangling at the weekend, when some of Mahathir's allies were accused of plotting with the former ruling party to form a new government that would exclude Anwar. Mahathir, who had not set a date for handing over power, had appeared irritated that Anwar's backers were demanding a clear timetable.

Attorney General Tommy Thomas told reporters there was no time limit for how long someone can stay on as interim leader, and that person has all the powers of a full-time premier including that of appointing his own cabinet.

Constitutionally, any lawmaker who can command a majority in parliament can stake a claim to form government. The king then has to give his assent before a premier can be sworn in.

The leadership of the Pakatan Harapan coalition formed by Mahathir and Anwar ahead of the 2018 election was scheduled to meet later on Tuesday. It was not clear if Mahathir would attend the meeting, though Anwar was expected to.

A showdown is also possible between Anwar and an alliance of Bersatu President Muhyiddin Yassin and Azmin Ali, who on Monday was sacked from Anwar's party, political sources said.

Others have called for Mahathir to be re-nominated as premier.

Malaysia's stock market recovered slightly on Tuesday after falling to an eight-year low on Monday while the currency also rose after hitting a near six-month low.