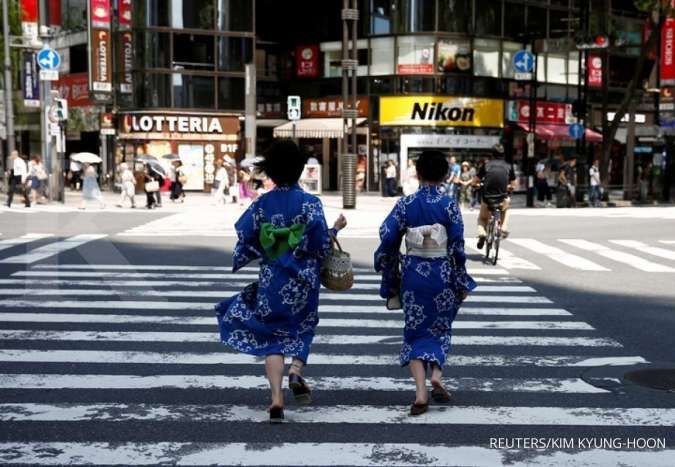 KONTAN.CO.ID - TOKYO. Japan's government expects the economy will contract this year as activity slowly recovers from the coronavirus crisis, with a return to growth seen next year, four government sources told Reuters.

Reflecting uncertainty over how long the pandemic will last, the government will take the unusual step of announcing several growth scenarios for 2020 and 2021 this week, based on whether the pandemic will end quickly or be prolonged, the sources with knowledge of the matter said on Wednesday.

Real gross domestic product (GDP) is expected to shrink in the current fiscal year through March 2021 under either scenario, but it would be smaller than a 5% contraction, one of the sources said.

The government had previously forecast 1.4% growth this fiscal year based on a boost to domestic demand from stronger corporate investment and a fiscal package it approved last December.

Analysts in a recent Reuters poll expected the economy to shrink 5.3% for the year as a whole, the fastest pace in decades, but believe it has begun rebounding in the current quarter and would grow 3.3% in 2021.

The world's third-largest economy is expected to have contracted 23.9% in the second quarter as the pandemic slammed global demand and Japan's state of emergency prompted people to stay at home and businesses to close. Preliminary GDP data will be released on Aug 17.

Under its most pessimistic scenario for the fiscal year through March 2022, the government expects to see nearly flat, but still positive GDP growth, another source said.

The Nikkei business daily reported earlier on Wednesday that the government will forecast GDP to contract by around 4.5% for fiscal 2020, followed by a 3.5% expansion for fiscal 2021.

The government has set a target to raise nominal GDP to 600 trillion yen ($5.71 trillion) by around 2020 but it will be delayed to around 2023, the Nikkei report said.

The government's economic outlook is more optimistic, especially of the current year, than projections made by others as stimulus steps to respond to the coronavirus crisis were accounted for, it said.

Rating agency Fitch on Wednesday lowered its outlook on the country's long-term foreign currency debt rating to negative from stable, citing the impact from the pandemic and rising public debt as policymakers try to get the economy back on track. It affirmed Japan's rating at 'A'.

Japan has so far pledged to spend a combined $2.2 trillion in two stimulus packages to combat the heavy blow from the pandemic. ($1 = 105.1200 yen)