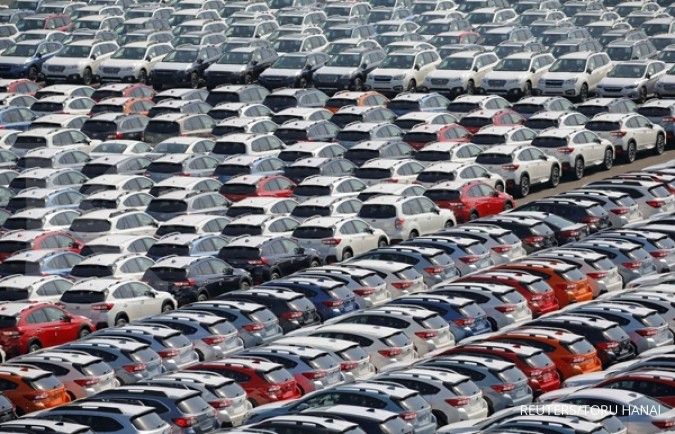 ILUSTRASI. Newly manufactured cars of the automobile maker Subaru await export in a port in Yokohama, Japan May 30, 2017.

KONTAN.CO.ID - TOKYO. Japan's exports suffered a double-digit decline for the fourth month in a row in June as the coronavirus pandemic took a heavy toll on global demand, reinforcing expectations that the economy has sunk into its deepest recession in decades.

U.S.-bound Japanese shipments nearly halved again due to plunging demand for cars and autoparts, while exports to China remained weak, pointing to the absence of a strong growth engine in the global economy.

Global demand for cars and other durable goods has sunk since March as the pandemic prompted many countries to lockdown, forcing businesses to shut and people to stay at home.

Though more countries have now started re-opening their economies, the data could diminish hopes for a quick rebound in global demand and Japan's export-led economy, analysts say.

"Exports are likely to seesaw for the time being," said Takeshi Minami, chief economist at Norinchukin Research Institute, citing a renewed rise in virus cases in Japan and the United States.

"If domestic and external demand remain sluggish for a prolonged period, supply capacity could be slashed, triggering a jump in bankruptcies and job losses in the latter half of this fiscal year."

Ministry of Finance (MOF) data showed on Monday that Japan's exports plummeted 26.2% in June from a year earlier, bigger than a 24.9% decline seen by economists in a Reuters poll. It followed a 28.3% fall in May -- the worst downturn since September 2009.

In 2018, the United States was Japan's largest export market, followed closely by China, and led by cars as well as motors, car parts and chip-making machinery.

Exports to China, Japan's largest trading partner, fell 0.2% in the year to June, as declines in shipments of chip-making machinery and chemical materials more than offset increase in nonferrous metal and car shipments.

Shipments to Asia, which account for more than half of Japanese exports, declined 15.3%, and exports to the European Union fell 28.4%.

Japan slipped into recession for the first time in 4-1/2 years in the first quarter and is on course for its deepest postwar slump as the health crisis weighs heavily on businesses and consumers.

The world's third-largest economy is forecast to contract 5.3% this fiscal year, the biggest contraction since comparable data became available in 1994, followed by a 3.3% bounce next year, a Reuters poll of over 30 economists shows.

Reflecting weak demand and declining oil prices, imports fell 14.4% in the year to June, versus the median estimate for a 16.8% decrease, leaving the trade balance in a deficit of 268.8 billion yen ($2.51 billion).

The Bank of Japan has signalled confidence the economy will emerge from the slump and has ruled out the risk of deflation, suggesting the central bank has paused monetary easing after it deployed stimulus twice so far this year.