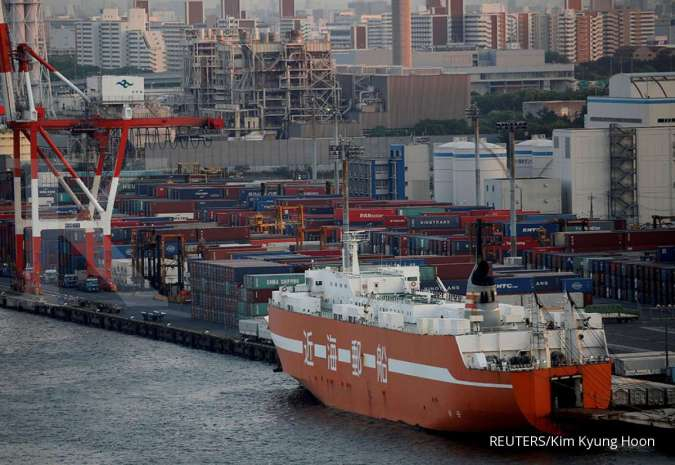 ILUSTRASI. An industrial port in Tokyo

KONTAN.CO.ID - TOKYO. Japanese business sentiment improved in July-September from a 11-year low hit three months ago, a key central bank survey showed, in a sign the economy is gradually emerging from the devastating hit from the coronavirus pandemic.

The data offers some hope for new Prime Minister Yoshihide Suga's administration, which has made economic revival from the crisis a top priority by pledging to maintain his predecessor Shinzo Abe's "Abenomics" stimulus policies.

The headline index for big manufacturers' sentiment improved to minus 27 in September versus minus 34 in June, which was the lowest level since June 2009, the Bank of Japan's closely watched "tankan" quarterly survey showed on Thursday.

The result compared with economists' median estimate of minus 23 in a Reuters poll. While still indicating most companies' outlook remains downbeat, it was the first sign of improvement in 11 quarters.

The sentiment index for big non-manufacturers also recovered to minus 12 from minus 17 in June, which was the worst reading since December 2009. Analysts polled by Reuters expected the index to hit minus 9.

The survey also showed big firms plan to raise their capital expenditure by 1.4% in the current business year to March 2021, versus 3.2% projected in the June survey and economists' median estimate of a 1.3% increase.

Japan suffered its biggest economic slump on record in the second quarter as the pandemic and anti-virus measures hit demand, and analysts expect any rebound to remain modest as fears of a second huge wave of infections weigh on consumption.

The BOJ has kept monetary policy steady since ramping up stimulus in March and April to cushion the economic blow.

BOJ Governor Haruhiko Kuroda has said the central bank stands ready to loosen policy further if Japan's recovery is derailed. But many analysts expect the central bank to stand pat for the time being given its limited tool-kit to prop up growth.

The tankan's sentiment indexes are derived by subtracting the number of respondents who say conditions are poor from those who say they are good. A negative reading means pessimists outnumber optimists.