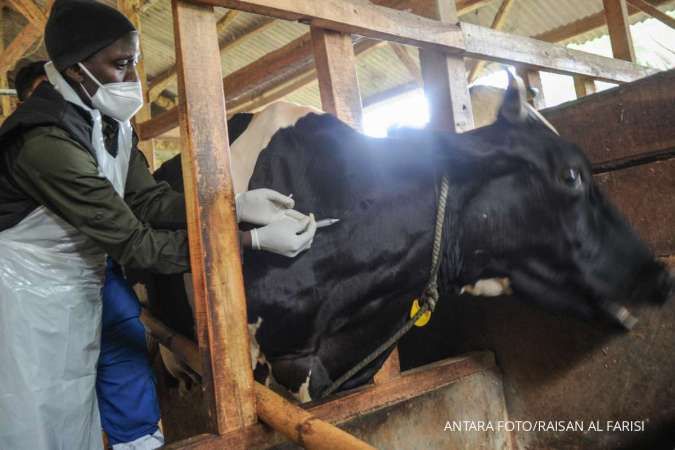 KONTAN.CO.ID - JAKARTA. Indonesia will procure 28.7 million vaccine doses for foot and mouth disease by year-end and limit livestock transportation between regions amid a surge in cases, a senior minister said on Thursday.

The country launched a nationwide livestock vaccination programme last week, as the disease has been found in 19 of the country's 34 provinces, with the number of infected livestock growing quickly from 20,000 last month to 232,549 this week.

Infections have spread ahead of the Eid al-Adha festival, when Muslims traditionally slaughter animals and share the meat with the poor.

"The president instructed that we prepare the medicines immediately and to prepare enough personnel who can vaccinate," Coordinating Minister of Economic Affairs Airlangga Hartarto said in a statement.

The procurement of 3 million vaccine doses is underway from producers in France, Australia, Brazil and New Zealand, and the government expects to import 16 million doses in the next three months, Hartarto said earlier this week.

The country also aims to buy locally-made vaccines, the production of which is expected to start by the end of August.

About 3,000 cattle had been vaccinated as of Thursday.

Foot and mouth disease is highly transmissible and causes lesions and lameness in cattle, sheep, goats and other cloven-hoofed animals, but does not affect humans.

Lawmakers had accused the government of letting the virus spread widely for the first time since the late 1980s. They have urged the government to ramp up efforts to prevent further spread.