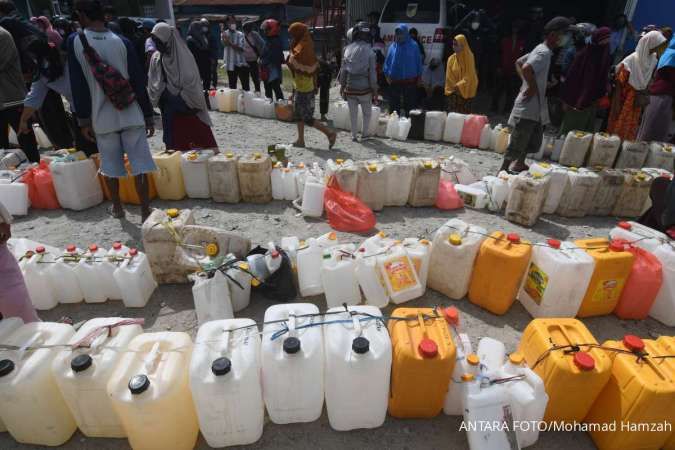 ILUSTRASI. Bulog, said on Tuesday it is waiting for regulations to allow it to distribute bulk cooking oil.

KONTAN.CO.ID - JAKARTA. Indonesia's state food procurement agency, Bulog, said on Tuesday it is waiting for regulations to allow it to distribute bulk cooking oil, as authorities seek to ensure the supply and affordability of the household essential at local markets.

The Southeast Asian country, the world top palm oil producer, has since April 28 halted exports of crude palm oil and refined products in a bid to control soaring local prices of cooking oil.

Officials have said Bulog will be designated to help distribute subsidised cooking oil in order to intervene when prices are high, but as of Tuesday the agency's head said it had not yet been officially assigned the task.

"There have to be regulations in place so there is not any misstep," Bulog chief executive Budi Waseso told a virtual broadcast briefing.

A regulation was also needed to ensure clarity on how costs would be covered since Bulog was likely to have to sell cooking oil, derived from palm oil in Indonesia, at below market price.

Retail prices of cooking oil have soared due to surging global prices of edible oils and remain stubbornly high. This is despite a string of government measures aimed at controlling supply, prompting President Joko Widodo to impose an export ban on the widely used vegetable oil.

Chief economics minister Airlangga Hartarto has said the ban, which has rattled global edible oil markets, will stay in place until the price of bulk cooking oil falls to 14,000 rupiah ($0.9619) per litre, equivalent to 15,500 rupiah per kg, across the country.

As of Monday, data from a price monitoring website showed bulk cooking oil was selling on average at 17,700 rupiah per kg.

Cooking oil was among the top factors driving Indonesia's April inflation, with the consumer price index rising 3.47%, the biggest rise since December 2017.