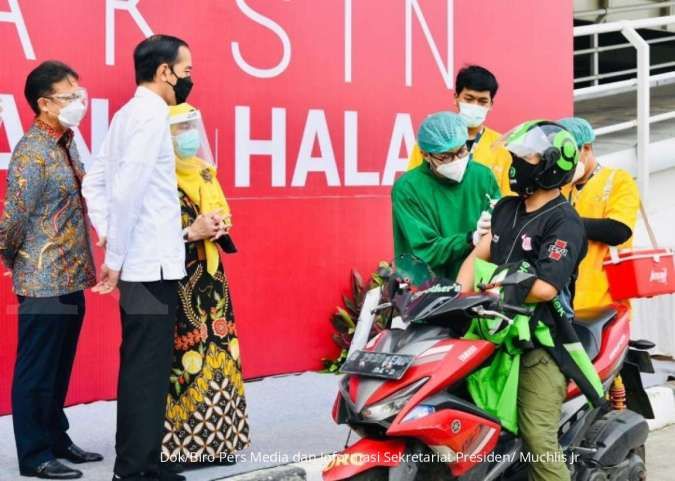 KONTAN.CO.ID - JAKARTA. President Joko Widodo said on Wednesday he hoped Indonesia's COVID-19 vaccination rollout will hit one million shots a day by July, as authorities opened up inoculations to anyone aged over 18 in Jakarta to contain increased transmission in the capital.

Health officials in the world's fourth most populous country, which aims to vaccinate 181.5 million people by next year, are trying to speed up the rollout after facing some supply issues.

During a visit to Depok, south of Jakarta, the president said he wanted vaccinations to hit a targeted 700,000 doses a day this month and then rise again.

"So in July, we can achieve the vaccination target per day of one million," said the president, who is widely known as Jokowi.

Health experts are worried about the risk of a new spike in infections fuelled by variants and a jump in travel last month as many in the world's biggest Muslim-majority country travelled back to hometowns for holidays after Ramadan.

Jakarta has been one of the epicentres of the outbreak and Siti Nadia Tarmizi, a health ministry official, confirmed that vaccinations would now be opened up to anyone over 18.

In a separate statement on Wednesday, the health ministry said its data showed the COVID-19 transmission rate in the past week in Jakarta was still "pretty high".

At least 11.43 million Indonesians have received two shots of a vaccine, either made by China's Sinovac Biotech and Sinopharm, or AstraZeneca.

As of May 31, Indonesia had nearly 76 million doses of ready-to-use vaccines.