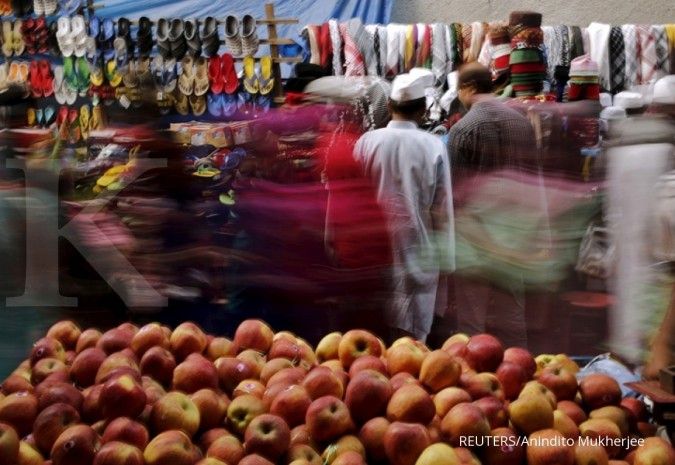 ILUSTRASI. Shoppers crowd at a roadside market next to a handcart loaded with apples for sale in New Delhi, India, November.

KONTAN.CO.ID - NEW DELHI. Indians are crowding markets and taking packed flights to holiday destinations again despite calls from authorities urging restraint and caution amid rising cases of the rapidly-spreading Omicron variant of the coronavirus.

In the coastal state of Goa, hugely popular as a tourist destination for its beaches and offshore casinos, hotels are running at nearly 90% occupancy, with some 90 flights landing in the western state daily, pushing air traffic volumes back to pre-pandemic levels.

"For a year people haven't celebrated anything. This year we have holiday-makers as well as people celebrating their milestone birthdays and weddings. In terms of occupancy, we are back to pre-COVID levels," Nilesh Shah, who heads a top travel body in the state, told Reuters.

Shah estimated that more than a million tourists had entered Goa in December alone as COVID-related restrictions eased in most of India and coronavirus cases hit a year-and a half low.

But Prime Minister Narendra Modi's government has warned states not to let their guard down as cases of the Omicron variant jumped to 358, although no deaths have been reported so far.

"There are festivals, there is the New Year and we are seeing that there could be trouble because of that," Vinod Kumar Paul, a senior government official who advises Modi on the pandemic, told a news conference on Friday.

On Friday the eastern state of Orissa announced fresh restrictions, banning all social gatherings till Jan. 2 and limiting the number of people allowed into a church for Christmas. This follows similar curbs announced by the Indian capital territory of New Delhi this week.

On Thursday, an Indian court urged Modi's government to suspend political rallies in states facing elections due to the rise in Omicron infections.

Elections to the state assembly in Uttar Pradesh, home to over 220 million people, are scheduled for early 2022 but final dates are yet to be announced. Three other states are also scheduled to hold local elections at the same time.

In all, India has recorded 34.8 million COVID cases and nearly 480,000 deaths during the pandemic so far.

Modi's government has raced to inoculate all of the country's 944 million adults and has given at least one dose to 88% of those.